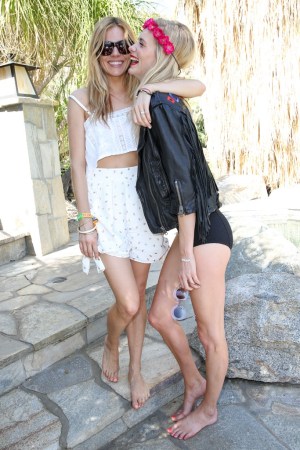 What happens at Coachella doesn’t necessarily stay at Coachella for model Poppy Delevingne, who celebrated her bachelorette party (dubbed “Popchella”) amidst the festival bacchanalia. British-owned brand Superdry took over a Palm Springs house set high into the San Jacinto mountains for the weekend, setting up a desert crash pad for Poppy and a few of her closest pals, including sister Cara and fellow catwalker Lily Donaldson. On Saturday afternoon, Superdry partnered with New York’s hip new Midtown restaurant the Wayfarer to throw a bachelorette brunch for the bride-to-be, with guests including Derek Blasberg, Harley Viera Newton and Jared Leto. Bathing suits and flower crowns ruled supreme at the private house party, which included a pop-up Superdry boutique and styling suite, and an outdoor DJ booth with panoramic views of the surrounding town. The bride-to-be also wore a customized fringed Superdry jacket, emblazoned with the word “Popdog,” while Sienna Miller wore a Topshop top paired with ankle boots. Cara’s girlfriend, Michelle Rodriguez, was not the only one absent from the festivities; towards the end of the afternoon, Poppy disappeared from sight to change outfits, according to one fellow partygoer.