“I have a lot of superstitions,” revealed Paolo Roversi. “Thirteen at a table — that’s very strong. I never put a hat on a bed. I don’t go under a ladder.…

“You know, somebody one day asked: ‘Are you superstitious?’ I responded ‘Me? No.’ ‘And why not?’ ‘Because someone told me it brings bad luck,’” he continued, with a laugh, prior to sitting down to the dinner hosted by Alber Elbaz and Frédéric Malle in Paris on Monday in honor of their women’s perfume, called Superstitious.

Elie Top said he’s become superstitious. When working with Elbaz, no one could directly hand each other a pair of scissors. Rather, they had to be put down on a table first.

“Now I do it all the time,” said Top, adding — by way of explanation: “It’s like something which is dangerous and cutting. It will break that relationship you have with the person.”

Top never passes salt to anyone nowadays, either. For her part, Vanessa Seward always wears the watch her husband Bertrand Burgalat gave her.

“It was his mother’s. I can’t go to an important meeting without taking it. It gives me strength,” she explained. “Also, for the first collection I did for my brand, I had a [clover], which was four-leafed. And it really brought me luck. Honestly, for me it had an impact.” 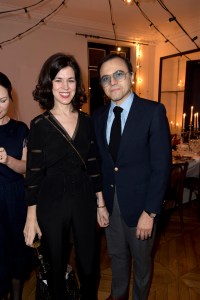 “If I see a black cat crossing my path when I’m driving, I generally park,” confided Malle.

“What I’ve always liked about what he does is that sort of seamless architecture, which is at the service of women, like Saint Laurent was. So for a long time I was dreaming of working with him,”  Malle continued.

Top, who made jewelry for Lanvin during Elbaz’s tenure at the house, made the introduction. “It clicked,” Malle said. “The first day we met, we talked about the fact that we hate recipes, we hate marketing, we hate all these sort of pre-set methods to make a success — they make the world predictable, boring and not that safe, in fact, because they never really work. We were both looking for something stronger, for something more creative, for inventing things as they go. Alber at one point said: ‘What I love in life is superstition.’”

For the perfume, Elbaz asked Malle to create the essence of a dress. 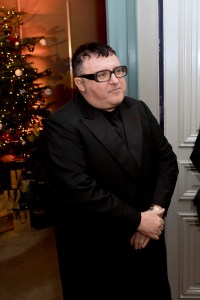