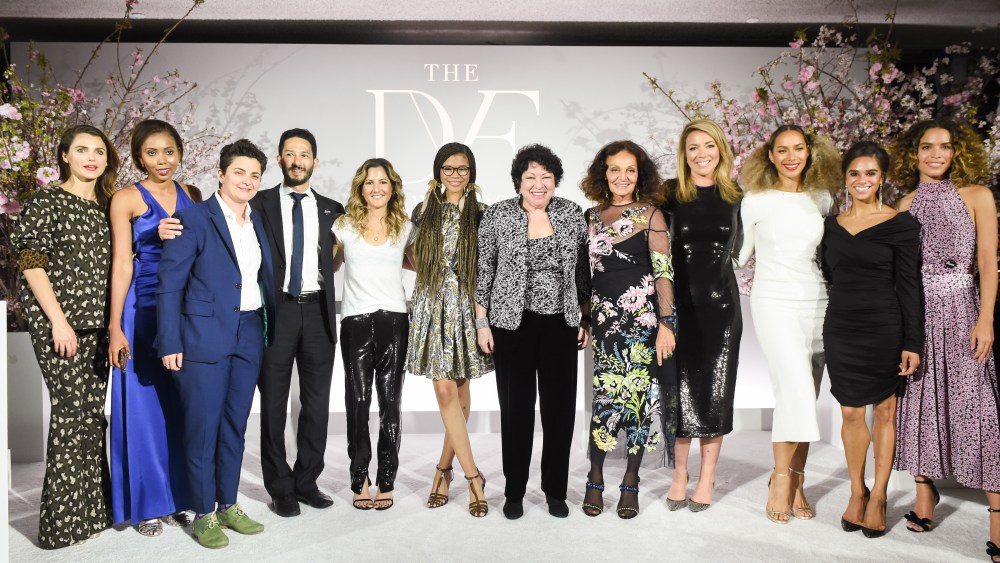 NEW YORK — The DVF Awards typically take on a more political bent in comparison to other fashion events. But this year, cast upon the backdrop of #MeToo, Time’s Up and a new crop of female activists, the show rang a particularly loud bell celebrating women.

Diane von Furstenberg took a moment to mull her own feminist history, coming up as a women’s brand in the Seventies.

“Back then, I was a feminist and proud to be one. And then it became — I wouldn’t say ‘out of style,’ but people took it for granted. My daughter’s generation took it for granted. But it’s nice to see that my granddaughter’s generation hasn’t,” she said, adding that Marjory Stoneman Douglas High School student and activist Delaney Tarr was in the crowd.

When asked whether she’d gotten a chance to chat with Sotomayor prior to the awards show, von Furstenberg lit up.

“She’s incredible. She’s like — oomph! She’s a woman of the people,” she said. “Maybe one day she’ll be president. We could use one.”

Gloria Steinem was also in attendance — the announcement of her arrival drew audible gasps from members of the press. She showed up in a turquoise and black beaded blazer, reserved and smiling for the cameras. Steinem, who was also deeply involved in the feminist movement of von Furstenberg’s generation, contrasted the activism of her time with that of today’s female youth.

“It’s way bigger. We were a few crazy people in the beginning,” she said. “Forty years ago, that phrase ‘sexual harassment’ was coined by young women trying to describe what happened to them at summer jobs. Now, women are being believed for the first time in my life.”

In the main room filled with pink flowers and long, white leather couches, Elaine Welteroth and Cleo Wade gave big hugs to “A Wrinkle in Time” actress Storm Reid, who sported bows in her braided hair. Fran Lebowitz was in deep conversation with two guests who hung on to her every word; Nicky Hilton rushed through the room on the phone while her flack jogged to keep up. Actress Keri Russell — who has been fielding rumors of a “Felicity” reboot film — and CNN’s Brooke Baldwin were also on hand to present awards.

Following a musical performance by Leona Lewis, Dukureh received the International DVF Award. She runs Safe Hands for Girls, a nonprofit organization that works to end female genital mutilation. Dukureh’s activism led to the banning of FGM in her home country, The Gambia.

“Rarely do we get to be part of change in our communities,” she said. “People are always comfortable imparting solutions, but they never want to see us as change agents. A lot of times, they want to point fingers at us and call us victims.” She’s currently nominated for the Nobel Peace Prize and has been named the first U.N. Woman Goodwill Ambassador to Africa.

Mufleh, the People’s Voice Award recipient whose organization works with refugees and children of war, gave an impassioned speech that centered around Syrian refugees and U.S. relations with the country.

“We should be ashamed of the way we treat refugees,” she said. “When I found out I was getting this award, I was a little nervous because I was like, ‘I don’t know if I want to be at the United Nations right now.’ Because the United Nations is not doing what they’re supposed to do.”

“Hear, hear!” someone shouted from the crowd.

Minutes later, a news alert stated President Trump had ordered airstrikes against Syria, to be carried out Saturday morning.

Justice Sotomayor, known for being the first Latinx woman on the Supreme Court, capped off the night with words about the women who raised her — her grandmother and mother.

“My mother worked hard to help the family. The one place she could escape from the hardships of her life was in her library, where she read everything she could,” she said. “Mommy found solace in books and stories, which was a world she actively passed on to my brother and me. And now you know why I’m a nerd.”