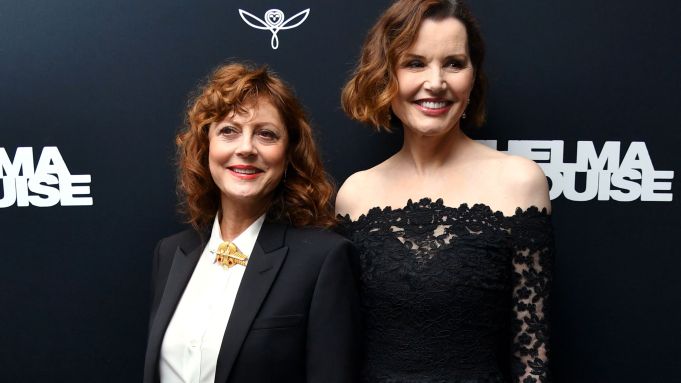 Political activism isn’t new to Susan Sarandon. But when she, “Thelma & Louise” costar Geena Davis, and Kering hosted a screening of the film to celebrate the centennial anniversary of women’s suffrage in America, it became clear that taking one of her most recognizable roles wasn’t meant to be a polarizing act.

“It turned out to be something that was so empowering and infuriating at the time,” Sarandon said, during her opening remarks. “One of my favorite lines is, ‘You are what you settle for,’ and I’m happy that this time, when we’re celebrating the anniversary of women being able to vote, that we’re not going to settle.”

“People thought the world had gone to hell because women had guns,” Davis added. Like Sarandon, who is known for her political campaigning and championing of progressive causes, Davis also has the Geena Davis Institute on Gender in Media, a force for equal representation and gender parity in entertainment.

While Sarandon had no idea the movie would raise hairs, the characters she plays don’t exist in a vacuum. “Every movie is political. You only notice the ones that challenge the status quo, but every movie tells you something about people or what to believe in,” she said. “When we did it, we didn’t do it for political reasons. But this wasn’t chosen as a political movie. It was a great tale of friendship and great parts for us and a great director, and that’s why we did it.”

Sarandon and Davis hosted the screening of the 1991 classic at MoMA (and the ensuing dinner at the Monkey Bar) alongside Laurent Claquin, the president of Kering Americas, and cohosts Diane Kruger, Christine Baranski, Arianna Huffington, Padma Lakshmi, Rupert Friend and Aimee Mullins, among others. The screening was part of Kering’s Women in Motion program, whose goal, as Claquin said, is “to advocate for better representation of women within the entertainment industry, which is still a challenge.”

A former collaborator of Sarandon, cohost Baranski also wants to push the envelope on representation. “It’s just fun to get women together and throw them onto a film together, we’re just such a force,” Baranski said. “You know, bring it on. If anything, I think more bloody movies, more female bloody movies.”

Friend seemed to be in agreement: at the dinner, he was among the first to note the timeliness of the film. “You realize that women have been saying this s–t for hundreds of years and this film said it beautifully,” he said. “I haven’t seen [‘Thelma & Louise’] in 20 years and, my God, does it stand up.”

The sentiment was echoed by Kruger, who attributed being a mother to a daughter as giving her a fresh take on the classic. “We haven’t seen it in a long time, and it’s amazing how modern and relevant it is. [Sarandon] paved the way for us actresses who came after her. I think she’s exemplary in using femininity in a way that is inspiring to me,” she said.

Kerby Jean-Raymond of Pyer Moss was also at Monkey Bar after the film, and he found the classic’s timelessness both inspiring and frustrating. “Like, s–t, we’ve been here before. We’ve been here before so vividly that we’ve made art about it, and we’re still stuck here,” he said. “But seeing it now, it’s right on time. It’s what makes something a true classic, when it feels timely.”