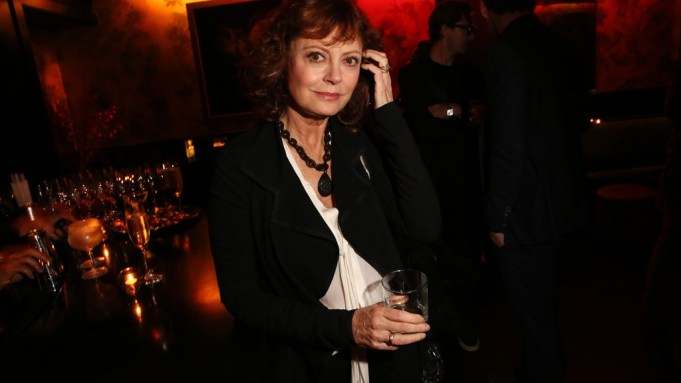 In 1983, the late director Tony Scott assembled an ultracool cast — David Bowie, Catherine Deneuve and Susan Sarandon — and set out to create what would become one of the most provocative and controversial films of the Eighties. Never mind that “The Hunger” was panned by critics as a stylish film that lacked substance (the soundtrack was by the post-punk band Bauhaus, with wardrobe by Yves Saint Laurent) or that Roger Ebert, in his review at the time, called it an “agonizingly bad vampire movie.” It is remembered, instead, for its steamy, sapphic love affair and has since become a cult classic. It was Scott’s second feature film, and, three years later, he would go on to direct that other Eighties classic, “Top Gun.”

On Wednesday night, more than 30 years after it opened, Sarandon, still a vixen in her late 60s, screened “The Hunger” again at the Museum of Modern Art’s Celeste Bartos Theatre. It was an apt location. During one particularly meta moment in the film, Sarandon’s character is asked what she likes to do for fun, and she responds, “Cocktails at the Museum of Modern Art,” which drew laughter from the audience, a group that included Julie Macklowe, Cory Bond, Constance Jablonski, Sante D’Orazio and Chiu-Ti Jansen.

Sarandon recalled the outrage that greeted the film upon release. Even her mother received hate mail at her home in New Jersey. “It was so edgy at that time,” she said. “Now, it’s nothing, right?”

For her, filming the much-scandalized sex scene was, actually, kinda hot.

“I thought, ‘Wow, if you’re gonna be in bed with a woman, how fabulous that the first woman you’re with is Catherine Deneuve?’” she continued.

The actress remarked that Scott was open to her feedback. “Originally, in the script, [Deneuve] was drunk [during the sex scene]. But I said, ‘Isn’t it much more interesting if they choose to be together? Do you really have to be drunk to go to bed with another woman?’ So we changed that,” she said. “For me, the most interesting part [of a sex scene] is how you get into it.”

Later, a few blocks north at Beautique, a De Grisgrisono-sponsored after party was brewing. Lisa Airan held court in a booth with celebrity hairstylist and Living Proof creative director Tim Rogers. “I thought it was so ahead of its time,” Airan said. “And the other thing I loved was the beginning scene, when [Bauhaus’] ‘Bela Lugosi’s Dead’ was playing.”