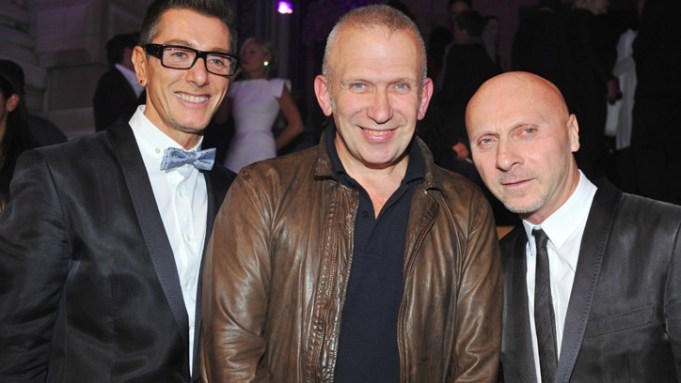 “I’m not Valentino and I’m not retiring,” Suzy Menkes told a who’s who of the fashion world Saturday at a party at Paris’ Musée Galliera to celebrate her 20 years as fashion editor of the International Herald Tribune.

Menkes thanked the sizable Italian contingent — which included Donatella Versace, Miuccia Prada, Frida Giannini, Domenico Dolce and Stefano Gabbana — for forgoing post-show relaxation to attend, plus the French designers, among them Alber Elbaz and Jean Paul Gaultier, who took time out from preparing their collections to turn up.

A video tribute relayed messages, including some from those who couldn’t make it, such as Marc Jacobs, Karl Lagerfeld, Anna Wintour and Olivier Theyskens; the last peeked out cheekily beneath an imitation of Menkes’ trademark coif.

“Whether it’s six in the morning or midnight, zero degrees or 50 degrees, or with a complaint, Suzy will always be there,” Elbaz declared in his message.

“She is like a mother,” related Dries Van Noten, noting Menkes attended his first show in 1992. “Whatever she writes, there are always lessons learned, even when it is critical. And what is great is there is always a next time for her and for us.”

“She can destroy everybody,” joked model Mariacarla Boscono. “Everybody in this room has been destroyed at least once. There should be 300 Suzys or 300,000 Suzys.”

Designers reminisced about where they were in 1988, when Menkes took up her IHT post. “That’s when I started my collection,” recalled Dolce.

“We were at high school in Canada; it was Matsuda time,” said Dsquared’s Dan Caten, who is off next to Hong Kong to open the first Dsquared boutique in Asia.

Betty Catroux declared she’s never liked work. “I was doing nothing, like today,” she trilled. “At least I am brave enough to admit it.”

Wearing a regal velvet jacket by Christian Lacroix that she has fittingly owned for 20 years, Menkes recalled being so excited to receive it that she placed it at the end of the bed so it was the first thing she saw in the morning. “And my dear husband David, who’s sadly no longer with us, said ‘That’s a very fancy dressing gown,’” Menkes recalled, to much laughter.

And true to journalistic form, she didn’t stop working. A “between-jobs” Lars Nilsson, who was keeping mum about his next project, said, “Suzy was trying to get it out of me earlier.”