Azzedine Alaïa was among guests Thursday night celebrating the new chandelier designed by the Bouroullec brothers. 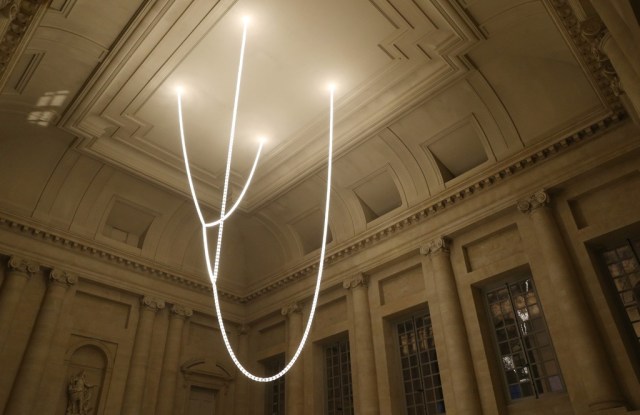 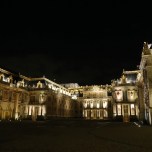 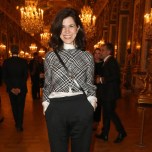 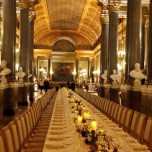 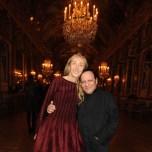 NIGHT LIGHT: Azzedine Alaïa was among guests at a dinner on Thursday at the Château de Versailles held by Swarovski to celebrate the chandelier designed by Ronan and Erwan Bouroullec, which illuminates the Gabriel staircase. It is the first permanent contemporary artwork at the palace.

“This chandelier has been quite a challenge on several levels,” said Ronan Bouroullec of the creation measuring more than 40 feet and weighing 1,100 pounds. Suspended in loops from the chateau’s ceiling, it comprises three interlacing strands, each made of hundreds of Swarovski crystals illuminated by LED lights.

“[The Bouroullec brothers] are all about details, precision and perfection,” said Nadja Swarovski, who was wearing an Alexander McQueen dress.

The designers demonstrated to guests how the chandelier’s light can be turned from powerful to dim.

Xavier Veilhan, a self-described fan of the Bouroullecs’ work, said he would like to have replica of the chandelier in his own staircase, but smaller.

“I’d like to see chimpanzees hanging on it,” commented another guest.

Alaïa, who has been collecting Bouroullec creations for several years, was accompanied by his longtime friend Carla Sozzani. The designer’s retrospective runs at Paris’ Palais Galliera until Jan. 26, 2014, and he has other exhibitions on tap — at Moscow’s Pushkin Museum and in Rome, and possibly in Philadelphia and New York’s Museum of Design.

In Versailles, attendees marveled and snapped photos with their iPhones while passing the King’s Grand Apartment, including Marie-Antoinette’s rooms, to head to the Galerie des Batailles, where the dinner was held.

Prince Emmanuel-Philibert of Savoy said he is working on a new concept for U.S. television.

“It would be a ‘pizza rescue’ show,” he explained. “Pizza margherita was named after my great-grandmother, Queen Margherita, [who] went to Naples, was served pizza and liked it.”