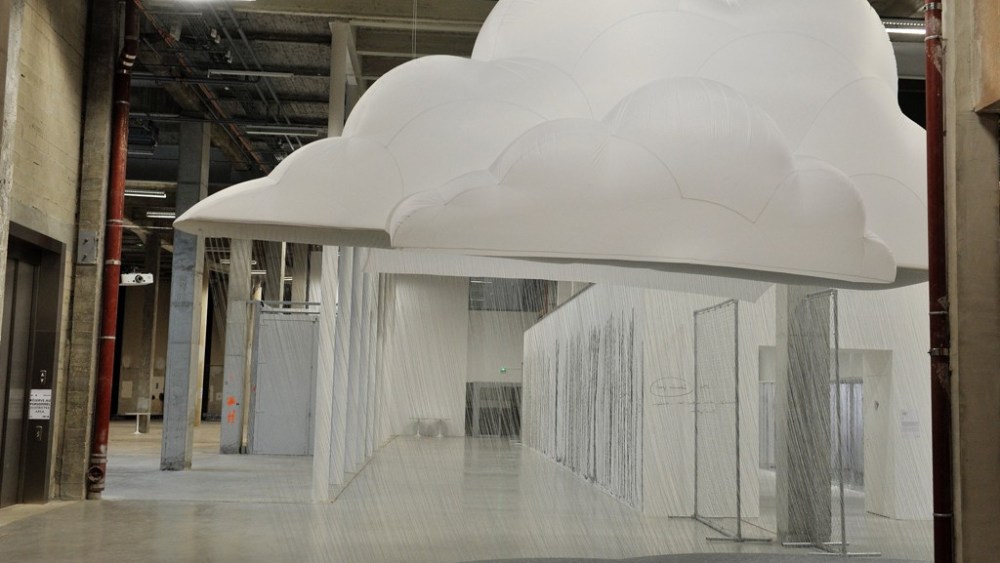 PARIS — “Everything counts in large amounts,” went the 1983 single by Depeche Mode.

And so it was at a dinner Swarovski hosted Wednesday night at the Palais de Tokyo to fete the solo exhibition by French artist Fabrice Hyber it is underwriting.

Designer Alexandre Vauthier said he couldn’t take his eyes off Hyber’s sculpture of a fluffy cloud, complete with crystal raindrops — 6,000 of them to be exact — strung on transparent thread.

Asked how many lipsticks went into his work titled “1 m3 de beauté” (or one cubic meter of beauty, in English), Hyber paused for a think and stroked his chin, before saying, “A lot.”

He noted that that the 330-pound sculpture, which stands on a concrete plinth, needs to be reshaped at least every two weeks given lipstick’s supple, collar-staining nature.

Titled “Raw Materials,” the exhibition runs through Jan. 7 and includes an array of weather rooms, including one that lets out a gust of wind when the door is opened.

The event drew a sprinkling of fashion designers including Anthony Vaccarello, Bouchra Jarrar and Berluti’s Alessandro Sartori, along with such art-world heavyweights as the Serpentine Gallery’s Hans-Ulrich Obrist.

Like many dinner guests, Elie Top couldn’t resist toying with the tiny crystals strewn over the dinner tables. He propped a square one on his ring finger, and decorated the décolleté of photographer Saskia Lawaks.

Dolores Chaplin dumped several dozen in her water glass and swirled them around, creating a dazzling snow-globe effect. The actress, who has a role in “Astérix and Obélix: God Save Britannia,” which hit European screens this week, will next appear in Olivier Assayas’s “Something in the Air,” due to open Nov. 14 and charting a turbulent period of social upheaval in Europe: the late Sixties.

“I play a movie star,” she said, describing her pre-historic costume as follows: “Basically a cavewoman in heels.”

Industrial designer Ron Arad said he just turned his hand to footwear design, creating an unusual zippered style for British firm Fitflop. He also recently unveiled a line of eyewear at the Silmo fair in Paris called PQ Eyewear. “I don’t need them tonight,” he said as he wandered off into the dimly lit party space.