The brand threw a party for the artist's new Swarovski key necklace. 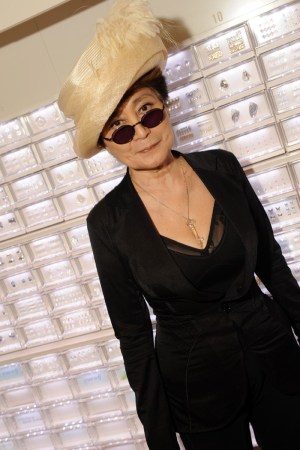 Yoko Ono quietly took interviews in the back room of the Swarovski boutique in New York’s SoHo Wednesday night, occasionally lowering her small, round sunglasses to make eye contact with reporters, who asked questions about her recent collaboration with the crystal maker.

“I was just so amazed that they understood my creativity,” Ono said softly, as she lifted an engraved silver crystal key necklace that dangled just above her black bustier. “My keys, the original keys I made in the Sixties, were glass keys.

Glass keys are very frail, making them in crystal is stronger and very powerful spiritually.”

Ono cocked her head slightly, causing the plume of white feathers that sprung from her matching white hat to flicker dramatically as she whispered: “They are very creative people.”

Julianne Moore, who was perched in a nearby banquette, gushed over the petite artist, as partygoers including Alek Wek, Sophie Buhai, Lisa Mayock and Nadja Swarovski sipped cocktails and nibbled on small hors d’oeuvres.

“Isn’t she the coolest?” said the actress, who was clad in a black

“I’m excited about Raf Simons at Dior,” she gushed. “I think that’s really exciting. His collections are amazing.”

Nearby, fellow actress Elizabeth Olsen talked about the benefits of having sisters who are fashion designers.

“I’m just so thankful,” she said of Mary-Kate and Ashley Olsen. “I’m so grateful that I have hand-me-downs. I can’t really fit into most of their things, but the best thing is that they give me samples that they don’t end up producing — that’s my favorite.”