Swarovski threw a party in Wattens, Austria to mark its 120th anniversary and the reopening of its conceptual crystalline showcase on April 30. 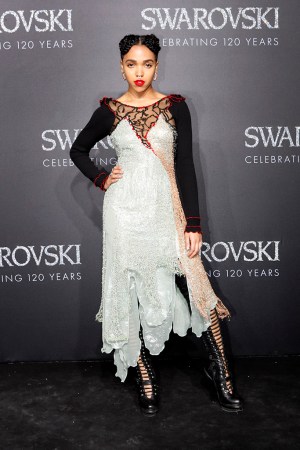 On Tuesday night, Swarovski threw a party in Wattens, Austria to mark its 120th anniversary and the reopening of its conceptual crystalline  showcase on April 30.

Jean Paul Gaultier, Mary Katrantzou, Peter Pilotto, Christophe De Vos and Iris Van Herpen were among the designers in attendance for the occasion — all previous collaborators with the brand — in addition to the Academy Award-winning costume designer Sandy Powell and a slew of editors who’d flown in just to take in the spectacle.

While guests dined, the Swarovski Musik Wattens — the Tyrolean musical ensemble donning traditional Austrian dress — played instrumental tunes. Gold candelabras and a cluster of sparkling angular gemstones covered the center of the table and throughout the night guests, like Powell, picked up the crystals to wrap them around their necks.

It was Katrantzou’s first time in the city. “I’m kind of in awe,” she said.

Launched in 1995, the Chamber of Wonder concept initially showcased a selection of crystal installations within Crystal Worlds. The Chamber has since nearly doubled in size, from 376,737 square feet to 807,293 square feet.

With the mountainous view framing the grounds, visitors saw upon entering the Crystal Clouds a 15,069-square-foot installation designed by Andy Cao and Xavier Perrot that is made up of 800,000 Swarovski crystals. They are part of a new garden that surrounds the Giant, a large conceptual head designed by André Heller that was naturally the subject of much fascination.

“I didn’t take a selfie with the giant. But I must,” Katrantzou continued. There was also “Silent Night,” an installation that features a sparkling crystal 19.6-foot tree composed of 150,000 angular crystals and, “Into Lattice Sun,” a dramatic crystalline cityscape created with more than 2 tons of crystals that visitors can wander through.”Timeless,” designed by the architects and museum designers at HG Merz alongside the Swarovski Corporate Archive, showcases archived items, including Daniel Swarovski’s 19th-century wooden cane and black top hat as well as current pieces — the slipper designed by Powell in the new film “Cinderella” among them.

“I appreciate the artists chosen for the Chamber of Wonder,” Nadja Swarovski said. “They are incredibly intuitive and that is felt in the work. Anything they do has a positive and amazing effect.”

After dinner on Tuesday, FKA twigs, dressed in Rodarte, drew the crowd from their candlelit dinners close to the stage for a surprise performance. “Oh my God. FKA Twigs? I love her so much!” Pilotto said excitedly. He had first seen her a couple of weeks earlier at the opening of the Alexander McQueen exhibit in London. “We knew about her from before and ever since then, we listen to her everyday. And so to see her again so unexpectedly, is, like, amazing. She’s so strong and beautiful. “