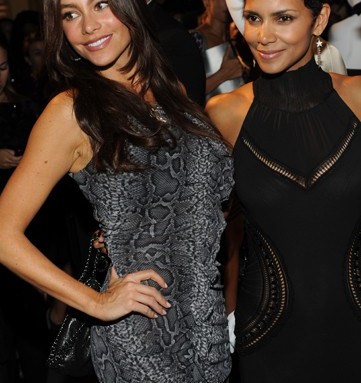 New Yorkers typically don’t wear a lot of color, but there was a particularly high volume of little black dresses at the Phillips de Pury headquarters on Monday night as Swarovski Elements and Nadja Swarovski presented “22 Ways to Say Black,” an auction of 22 one-of-a-kind LBDs from designers such as Donna Karan, Catherine Malandrino and Thakoon, benefiting the American Cancer Society and Carla Bruni-Sarkozy’s pet cause, La Ligue Nationale Contre Le Cancer. While Sarkozy wasn’t in attendance, stars such as Halle Berry, Julianna Margulies and Sofía Vergara were among revelers — many of whom were appropriately outfitted in their own little black dresses for the occasion.

“You can’t go wrong in a little black dress. It makes you look slimmer,” said Berry, who looked particularly svelte in a little black Roberto Cavalli number. “But after I wear one, I can’t really wear it again. I discard it.”

Vergara, meanwhile, stood out in a gray animal-print frock. “I didn’t get the memo,” the actress said.