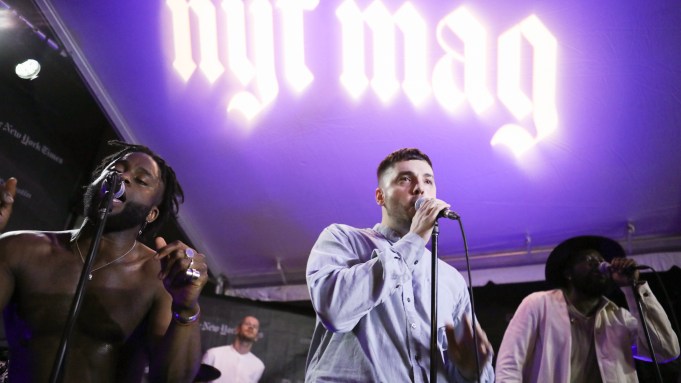 The first thing anyone should know when planning a night out at SXSW is that the lanyard must stay on.

Indeed, an item that might be deemed — dare we say — dorky in just about any other context is a badge of honor at the Texan tech and entertainment festival, which got underway on Friday. And just because it’s nighttime and you’re looking to let loose at a cast party or a media function does not mean you should part with that glowing orange lanyard. No sirree.

The opening weekend, which marked the film portion of the week, featured parties for pictures like “American Animals,” “Support the Girls,” “A Quiet Place” and “Blockers.” Numerous media companies and digital brands from CNN and the New York Times to Buzzfeed and Twitter toasted the festival’s opening night — and lured more of the tech crowd than the celebs.

CNN kicked things off with a party titled “Go Bananas” at cocktail bar The Market & Tap Room, and executed, instead, an apple theme — a playful take on a fake news ad the network ran last fall.

A friendly fellow offered up gala apples on the corner outside the bar; inside, news junkies and CNN staffers bobbed to Jeremih’s “Don’t Tell ‘Em,” spun from a both by New York DJ duo Angel + Dren. The bar was decorated with apple crates and plenty of CNN logos and guests posed for photos as a live podcast taping of “The Axe Files with David Axelrod” took place.

Over on the patio at Irene’s, the New York Times Magazine celebrated its music issue, which features four different covers with Sza, Gucci Mane, Cardi B and King Krule. Edinburgh-based trio Young Fathers performed for a crowd of hipsters in Black Sabbath Ts and off-duty tech bros in gingham button-downs. At this point in the evening, the lanyards begun to stick to the now-sweaty necks of their wearers, who swayed to the music with abandon.

The Twitter House on Rainey Street was a party staple over weekend, and for Friday night’s bash Twitter partnered with BuzzFeed for an “AM to DM” party, complete with hashtag balloons, a ping-pong table and a pop-up from Wendy’s serving Twitter-blue cotton candy Frosties. In the astro-turfed backyard, bearded techies in hoodies swung their hips in hula hoops as “Sex with Me” by Rihanna played on.

SXSW: Scene Guide of Where to Get the Best Tacos, Smoothies and Vegan Food in Austin