Abbi Jacobson and Ilana Glazer were in town to toast to their coverage in Marie Claire and to talk on stage to editor in chief Anne Fulenwider. 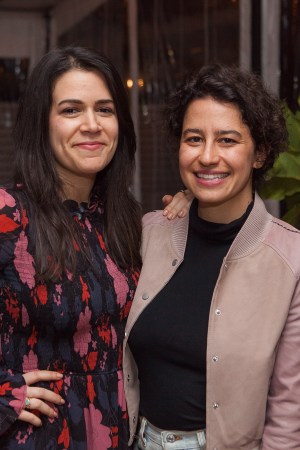 For the opening night of SxSW Interactive, notables from the worlds of fashion, media, Hollywood and tech dodged raindrops to descend upon Austin, Tex., for a few barbecue-flavored weeks. Among this year’s attendees were the stars, creators and producers of “Broad City,” Abbi Jacobson and Ilana Glazer, who were in town to toast their coverage in Marie Claire and to talk on stage to editor in chief Anne Fulenwider about their transition from Web series to Comedy Central must-watch.

“It’s my first year, so I didn’t know what to expect,” said Glazer, wearing a leather jacket, denim cutoffs and ankle boots. A “graduate” of the comedy institution the Upright Citizens Brigade Theatre, Glazer was especially excited to support a documentary by Todd Bieber about comedian mentor Del Close, which features Matt Walsh and “Broad City” executive producer Amy Poehler.

“It’s the community that we came out of,” she said of herself and Jacobson, “so it’s cool to see something in retrospect that is now an established thing.” She also made time to make an oh-so-South-by tech connection: “I met this girl on the plane who has a company that uses everyday objects to create energy.” (That would be Jessica O. Matthews, founder of Uncharted Play, whose soccer balls generate and store electricity that powers an LED lamp, for the uninitiated.)

Friend Ellen Page, who interviewed the two recently for Interview magazine, and Keegan-Michael Key, of Comedy Central sketch series “Key and Peele,” also came by to toast to the two.

Photographer and journalist Amanda de Cadenet, who’d just came over from a party downtown, stopped by before heading off to a Strokes concert (her husband is guitarist Nick Valensi). An early adopter of digital media, she’s been coming to the festival for the last five years, because “it’s all the most exciting things in once place,” she said.

Perhaps most exciting — one might only imagine — was when she met President Obama before he took the stage earlier that afternoon to recruit techies to the government sector. “He was great,” she said — but so was Hillary Clinton, who she’d just interviewed for her show, “The Conversation,” for which she’d managed to ask Clinton something she’d never been asked before. But, alas, she wouldn’t be asking any tough questions on stage this year, as her schedule, like so many others’, called her back to L.A., pronto.