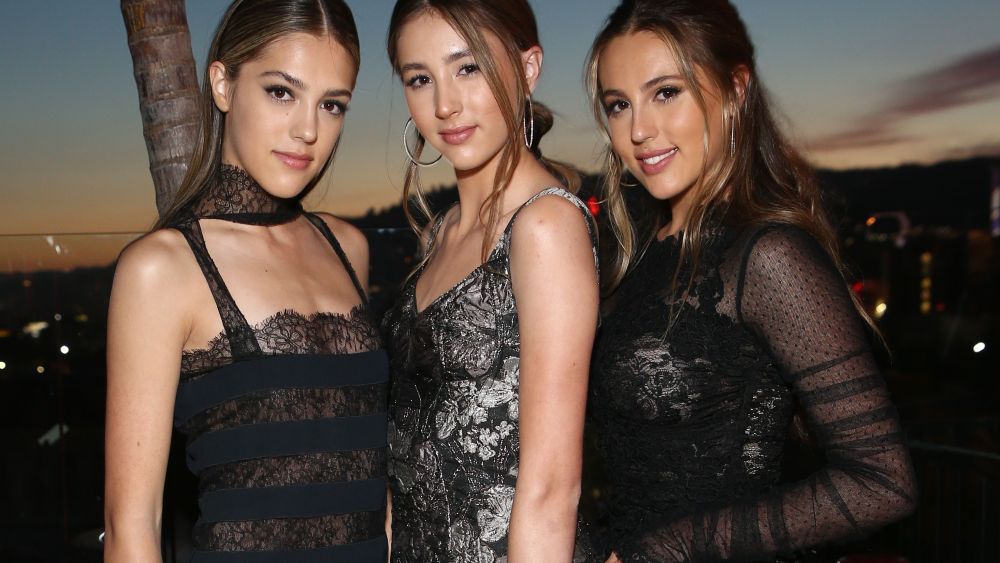 Good looks tend to run in the family in Hollywood, so it’s no surprise that the Stallone sisters — Sophia (20), Sistine (18) and Scarlet (14) — have attracted attention just like other famous siblings before them. On Wednesday night, Harper by Harper’s Bazaar and Sephora toasted the mini mag’s May cover featuring the pretty troika at Mama Shelter in Hollywood.

In addition to their proud parents Sylvester Stallone and Jennifer Flavin, Victoria Justice, Delilah and Amelia Hamlin, Debby Ryan, Joey King, Lily Reinhart and a host of other PYTs showed up to celebrate. The sisters also took a few minutes to chat with WWD about their ascent in Hollywood and fashion. But not before their father tried to butt in.

“Why don’t you ask me about my cool Rolex instead?” he asked. “Stop it,” said Sophia. “He’s always trying to steal the attention,” they all said. “Hey,” Stallone said, backing away. “We have to go network,” said Sistine. “I don’t know how to do that, but I guess we’ll figure it out.”

WWD: Is this your first magazine cover?
Sistine: We did a trade cover together for the Golden Globes and then finding out we got Harper by Harper’s Bazaar was ah-mazing.

WWD: You also just did your first international ad campaign together, right?
Sistine: We did an Australian campaign for The Daily Edited [the Sydney, Australia-based accessories e-tailer] so we got to have these cool custom handbags that we were posing with; it was so fun. We actually shot it in L.A.

Sophia: But it would be cool to go to Australia. I don’t think any of us have been there yet…

WWD: What’s it like modeling with your sisters?
Scarlet: It’s not really any different. We are goofy both on- and off-camera so doing it with our sisters makes the experience so much easier and so much fun. I love that we are coming into the Hollywood business all together.

Sophia: And it’s nice through this that none of us have really changed. None of us have gotten a big head; I think we all ground each other, so on-camera or off-camera we’re very consistent.

WWD: Who do you follow on Instagram?
Sistine: I follow every major design label because I like to keep updated with what’s happening. Someone who’s very consistent is Jeremy Scott. He’s always posting and he posted a photo of us because we were wearing Moschino for one of the shots in the [Harper] shoot so it was so cool that he took a photo and tagged us.

Scarlet: I follow a lot of actresses, so Blake Lively is my favorite. And Selena Gomez is my favorite singer, and she also produced “13 Reasons Why,” which is also one of my favorite TV shows.

Sophia: I love to follow Karlie Kloss. I love what she stands for, she’s a beautiful model and she’s also extremely smart — she was at a TED talk recently.

WWD: How do you feel about being role models for young women?
Sistine: If anyone viewed any one of us as a role model, that’s such an honor and an opportunity to not only be an influencer, but also as the Millennial generation, we have such a strong voice on social media, so being able to put a voice out there or put any type of inspiration, it only takes the click of a button and I think that’s so cool.

Sophia: We all have really good moral values. I’m in college, Sistine just graduated high school and Scarlet is just starting high school, so I really hope people do look up to us, because we want to do the best for them.