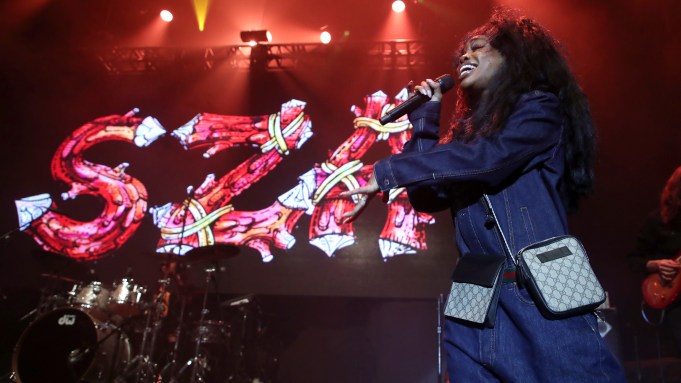 “Off with your head, dance ’til you’re dead,” pretty much summed up the mood at the Levi’s 501 Day x Karla celebration in Los Angeles on Wednesday night. Starlets like Jamie Chung and Ashley Madekwe heeded the call, singing along with Karen O as she performed the Yeah Yeah Yeahs’ popular anthem at the Hollywood Palladium while decked out in a Karla Welch-designed fringed Levi’s Trucker jacket.

“I mean, you can’t get any better than the Yeah Yeah Yeahs,” said the stylist, who created a capsule collection and portrait series to celebrate the birthday of the famous blue jeans. But the band was followed by SZA, who sang a more soulful set, setting the crowd up for the final act, Lauryn Hill.

While the mini music festival was short in comparison to the all-night extravaganza Hedi Slimane held at the Palladium to mark his last runway show for Saint Laurent, Ms. Hill did keep the crowds up late on a school night, not hitting the stage until after 11:30 p.m.

“I bet she’s not even here yet,” said one guest, after scouring the backstage area. “You need to stay until Lauryn comes on,” he told pal Holland Roden, who seemed content to text from the comfort of a reserved booth. There were several other famous faces in the crowd, including Lucy Hale, Jack Kilmer, Lily Aldridge, Storm Reid, Soko, Garrett Hedlund, Sarah Paulson and Chanel West Coast, who customized her jeans by cutting the side seams open to midthigh.

Up in the VIP balcony, Kaia Gerber kept things PG-13, sticking close to pal Charlotte Lawrence and another model girlfriend, though she did jump up to shimmy to Ginuwine’s “My Pony,” exclaiming, “I love this song!” By the time Hill appeared to sing “Everything Is Everything,” Gerber was long gone, but it was, after all, a school night.