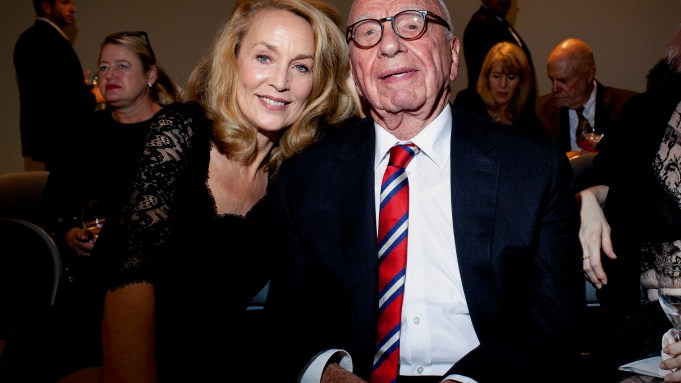 The allure of the muse was the topic of the night Tuesday at Sotheby’s, where the New York Academy of Art hosted their 27th annual Take Home a Nude event.

Forgoing their usual single honoree, the Academy recognized 11 muses, including Jerry Hall, Helena Christensen, Brooke Shields and more, who attended alongside Naomi Watts, Liev Schreiber (the friendly exes chatted with friends and even sat for the auction near one another), Padma Lakshmi, Will Cotton, Tali Lennox, Gabby Karan de Felice, Alexander Gilkes, Colby and Tico Mugrabi, Ippolita Rostagno and more.

“My children, obviously,” said Watts during the cocktail hour of the muses in her life. “I think it’s someone who makes you think about stories and inspired you and pulls your focus from a day-to-day, routine way of thinking, and pulls you into something enigmatic.”

Hall arrived with her husband Rupert Murdoch; the pair posed briefly for photos and Murdoch waited patiently for his wife while she spoke with reporters.

“It’s very nice and flattering to have been painted, six times by Andy [Warhol], and a few other artists,” Hall said of her muse status. “Working as a model there are lots of photographers and I’ve been very, very lucky. And working with so many great fashion designers — it’s been lovely. It’s very flattering to inspire someone to do something beautiful.” Her own muses? “I always loved the old Hollywood movie stars — Veronica Lake was my favorite,” she said.

Muse to many, Shields spoke of the women in her life who have given her inspiration.

“I’m inspired by women who have weathered time and stood the test of time and didn’t lose their own self, their own essence in the process,” she said. “I’m working with Candice Bergen right now and I watch her and I’m in no position to say a muse but I watch her have grace and humor and respect and those are the kinds of people that I look up to and who inspire me.”

Shields is a longtime fan of the event, and marked her fifth one on Tuesday night.

“I was invited years ago and I was so excited by how included I felt, just by virtually enjoying art. I didn’t need a degree, I didn’t need talent, I needed to have an open mind, and there aren’t many environments that nurture that, and ask for that of people,” she said. “There is very little pretension — none actually — in this room. The art community has always been very personal to me, and I think it’s probably because I’m not a figurative artist, I don’t paint, but I’ve been surrounded by artists my entire life via my mom — she just had an eye. She understood it. I was lucky enough to be in the company of people like Andy — oh, that sounded obnoxious. Warhol! That sounds really — ‘let me get my invisible cigarette and tap it!’”

Just then a margarita, black salt on its rim, appeared for her. “This is a thing of beauty!” she thanked its escort profusely. “I have a reputation around here — I’m proud of myself.”