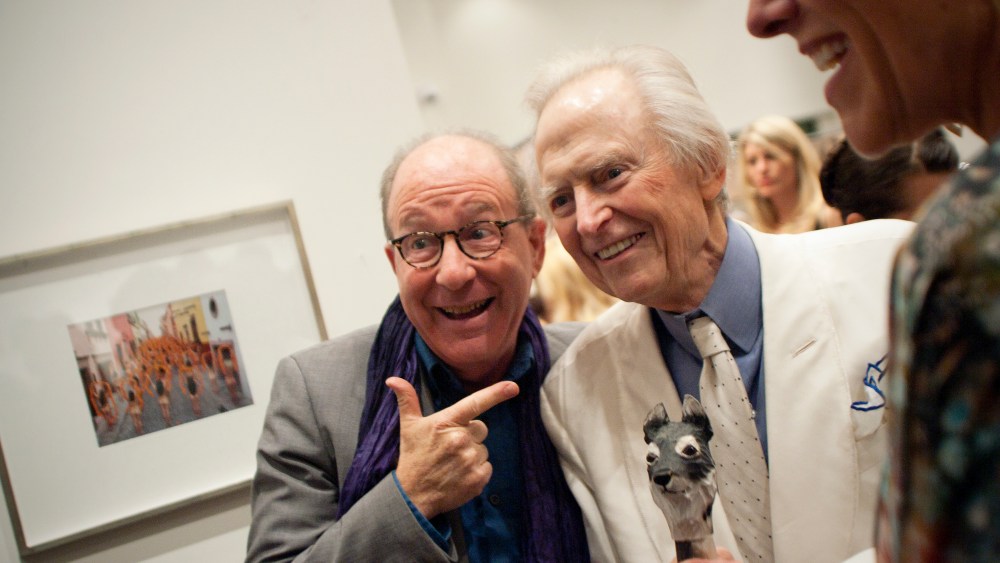 Playboy may no longer have nudes, but on Thursday night, Sotheby’s was full of them.

The art auction house was playing host to the New York Academy of Art’s annual “Take Home a Nude” auction and party. This year’s iteration, honoring Tom Wolfe and the art critic Jerry Saltz, saw over 150 works of art up for auction, all of which adhered to the “nude” theme. Well, almost all of them. “I guess technically he’s nude,” said one optimistic guest, surveying a painting of a buffalo.

Naomi Watts was veering more toward the traditional “humans in no clothes” nude when it came to the pieces she chose to bid on. “There’s a small picture of a girl in her underwear and it’s got some nice, beachy colors,” she said. “I love young, new artists. It’s nice to get them when you can afford them.”

While there were certainly plenty of new artists, both on the walls and in person, it was a pointillism-esque Ryan McGinness piece scaling an entire wall of the room that drew most attention from the likes of Brooke Shields, Dustin Yellin, Gabby Karan De Felice and a late-arriving Mary-Kate Olsen, with fiancé Olivier Sarkozy in tow.

McGinness crafted the piece out of a series of black dots, each of which included an image he had Instagrammed every day for the past three years. Perfect, considering that “Celebrating Instagram” was the theme of the evening. “This was just something I was making anyway,” McGinness said with a shrug. So, does the painter consider Instagram to be an art form? “It can be. But, it’s more commonly used as a way to reproduce artwork. I don’t think that’s using it to its fullest potential.”

Nearby, writer Glenn O’Brien was being mistaken for banner honoree Wolfe. Chalk it up to another peril of Instagram culture. “You are the second person who has thought that tonight,” the confused writer said (to be fair, he was wearing an all-white suit, a signature of Wolfe’s.)

Wolfe himself was unmistakable, punctuating his all-white ensemble with a wooden cane carved into the likeness of a wolf’s head. He gravitated to a painting of his own up for auction, as a posse of adoring fans surrounded him — many in matching all-white, per the event’s suggested dress code. “I’m sure they all dressed this way by instinct,” he quipped. As for his thoughts on Instagram? “I’m a little bit behind on my personal media.”