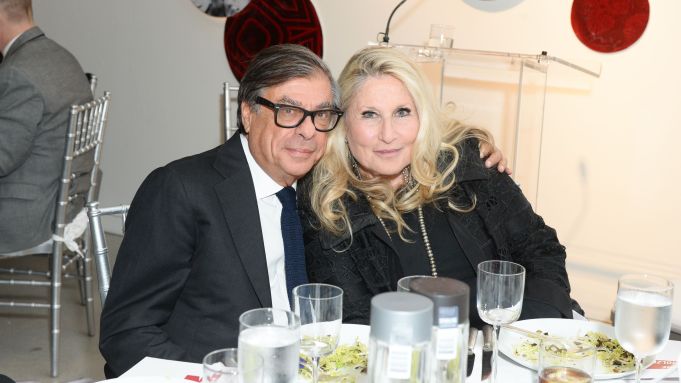 “I hear if you get far enough from the front of the room, the art gets less expensive.”

So mused one partygoer at Sotheby’s, which played host to the 25th annual “Take Home a Nude” auction and dinner party on Monday night benefitting the New York Academy of Art.

No word on whether his hypothesis had any merit, but not everyone in the room shared his frugal approach: The event, which featured over 180 lots with works from Marina Abramović, Patrick Demarchelier, Nicole Eisenman, Philip Pearlstein, Ross Bleckner, Walter Robinson and Kalup Linzy, ultimately raised over $1.1 million for the Academy, a record-breaking amount.

But the most popular gal in the room was undoubtedly Jane Holzer, the event’s honoree and muse to Andy Warhol, who cofounded the Academy. Holzer, as famous for being a Sixties socialite as she is for her modern art collection, was affectionately nicknamed “Baby Jane” by former WWD columnist Carol Bjorkman. “I don’t love it,” Holzer admitted of the nickname, which has stuck to her like glue. “But I love her.”

Brooke Shields said a few pieces in the room had caught her eye, though she had yet to place any bids. “I’m a newer friend of Jane’s. I’m more of a fan,” she said. “Put in a good word for me.”

Bob Colacello met Holzer during his tenure at The Factory, where he worked as an editor of Warhol’s Interview Magazine. “Jane’s just always been so cool,” he said. “She’s a businesswoman, she’s a movie star, she’s an art patron. And the hair. She’s got it all.”

“She was a great beauty,” added Glenn O’Brien, “but she was also really fun — and funny.”

During dinner, where Academy alumni were seen sketching live models, Colacello and Holzer took the stage for an impromptu interview.

“Tell me the truth,” said Colacello to Holzer. “When Andy met you, do you think he was more impressed by your fantastic mane of blonde hair or the fact that your parents owned half of 4th avenue?”

Holzer — who has retained her fantastic mane of blonde hair — took a moment to reflect on Warhol’s generous spirit.

“He cared so much about people, and he was the antithesis of what people assumed,” she said. “He would always pick up the tabs at Max’s Kansas City, because he wanted all the young kids to be able to eat. He would purposely pick up the tab so they could eat. But he didn’t want them to do drugs, so he would never give them money, because he was afraid what they might do with it.”