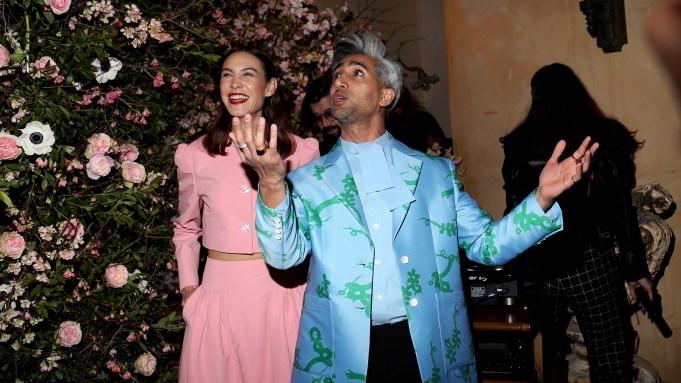 If you’re binge-watching Netflix’s new series “Next in Fashion” and haven’t gotten to the winner reveal, Wednesday night’s Net-a-porter hosted party was a bit of a spoiler.

But how can one resist kicking off NYFW with a toasting of the winner — Minju Kim — and the arrival of her designs to the online retailer?

The love between France and Chung, who only met less than a year ago but have become quickly attached, is obvious to fans of the show.

“What you see on TV is pretty much the first time we’re getting to know each other,” France said, from a back lounge room in the town house, having finally peeled away from the crowd.

“That’s how we met — because I was a fan,” Chung added. “From the first sound that left my mouth that’s continued as the energy that wraps up our relationship: me going ‘ahhh!’”

The two said the party was their limited appearance at NYFW — Chung said her NYFW plans are actually to go to London, while France is off to Los Angeles. More remarked on the changing nature of fashion month, and how their show structure factors into that.

“I feel it every day because I have a company,” Chung said. “It’s a changing time, but I don’t think that I would get to do what I do if it wasn’t modern times.”

“I quite like that it’s changing,” France said. “I like that the industry is becoming slightly more inclusive. Things like this, a presentation, is a lot more accessible and achievable for smaller brands I think. Those fashion shows are so bloody expensive, and that really does affect a business.”

“But it’s also amazing to witness, going to a show — its proper theater,” Chung said. “But how much does that engage your consumer?”