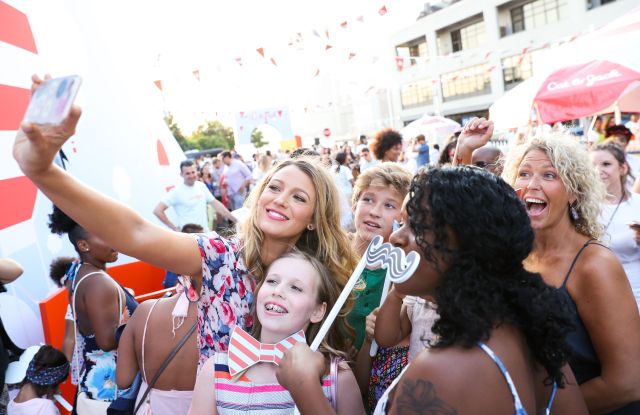 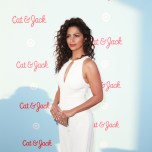 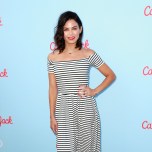 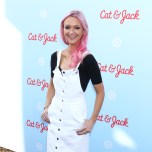 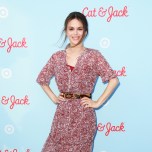 “I see the slide!” squealed an elated tyke Thursday evening, tugging on his mother’s sleeve as they rounded the corner towards Brooklyn Bridge Park. Target had wrangled mommies and mini-me’s to head across the river for an evening celebration of their latest children’s line, Cat & Jack. Publicists and Target staffers almost equaled the number of guests, most of whom brought their children — gingham-clad youngsters running around on the woodchipped party area, pausing to snatch a bite of pizza or some lemonade from a passing waiter. Celebrity mothers Blake Lively, Rachel Bilson, Jenna Dewan-Tatum and Camila Alves were on hand, sans offspring, to toast the new line.

“The Cat & Jack ad campaign was done by kids,” said Target chairman and chief executive officer Brian Cornell. “We wanted their energy and enthusiasm. The brand is off to a great start. I’m counting on it being a $1 billion brand.”

The proximity to water helped keep things cool, but nonetheless New York’s so-called “heat dome” had busy mothers wiping their brows as they tried to keep up with their children, overexcited at the towering sight of a red and blue slide. “I just got back from vacation in Mexico, so I’m used to the heat at the moment,” Dewan-Tatum said. “I’ve just been sweating for 10 days straight. But it’s way better than cold New York, so I will take it.”

In designing the line, which comes with a one-year guarantee, Target recruited children nationwide to consult — a fantasy for many. “I would want to know what Evy would choose for this!” Dewan-Tatum added of her daughter, Everly.

Bilson shared her sentiment. “I think my daughter would’ve loved to have been part of that, even at 20 months old,” Bilson said of daughter Briar. “She does [like fashion], a little too much. She’s already not letting me dress her. She likes pants, she has to have pants on, and she’s definitely opinionated.”

“My mom was a designer herself, so I grew up around that,” Alves said. “So I was always bringing some colors and fabrics to her, to mix this and mix that together. This is so exciting, to be able to have a kids line that is inspired by them.”

Alves said she, husband Matthew McConaughey and their kids, just returned from spending six weeks in South Africa, where McConaughey was filming “Dark Tower,” an adaptation of the Stephen King novel. “We’re now enjoying summer time in California,” she said, walking toward the SoCozy tent. But not before plugging Yummy Spoonfuls, the new frozen organic baby food she cofounded and which is sold exclusively at Target. “If it’s apples, it’s just apples,” Alves said. “Adults are eating the berries and taking it to the gym.”

After a fashion show showing off the collection, Blake Lively arrived, emerging from a minibus with her nieces in tow and posed on the carpet to the beat of Drake’s “One Dance.” Chaos ensued upon Lively’s arrival; one photographer toppled over from her step-ladder, while another ran across the street and jumped up on a car to secure an aerial Lively shot.

A little girl in Rapunzel braids chewing on a doughnut gawked at the actress, who has drawn praise for her maternity style in recent promotional appearances for films “Cafe Society” and “The Shallows.” “I had pretty zany fashion when I was a kid,” Lively admitted. “I would wear some of my mom’s clothes — she would take things like women’s blouses and turn them into dresses for me. I always dressed a lot more expressively than a lot of kids at my school, and sometimes kids were mean about that, and sometimes they weren’t, depending on what school — I went to 16 different schools, so at some schools it was accepted and other schools it wasn’t. But I’m glad my mom taught me that at a young age.”