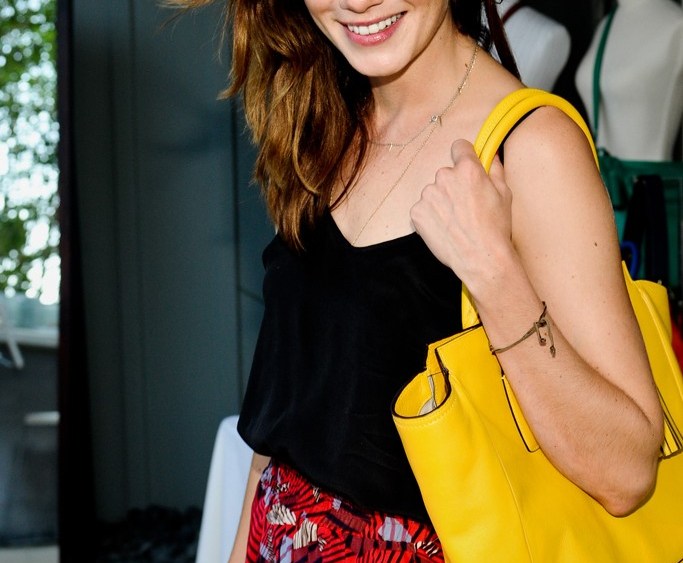 Tea time in Beverly Hills doesn’t call for crumpets, but rather a glass of chilled rose to sip at sunset.

That is precisely what starlets Elizabeth Banks, Mandy Moore, Jordanna Brewster, Michelle Monaghan and Jena Malone did on Thursday at the home of Ashlee Margolis, where Tucker, Dannijo and Coach showed off their latest pieces at a private trunk show. Banks arrived in yet another colorful printed frock (she has sported at least 10 this season) and added a bright orange Coach purse to her look. “I was never a print person, but they’re just so good right now,” she said. Maria Menounos also veered away from the solid black shirtdress Tucker designer Gaby Basora suggested, instead picking up a pair of shorts in the same pattern as Banks’ dress. “I feel like I’ll wear this more,” she said. Elsewhere on the pool patio, Joy Bryant played with Nia Long’s baby and stylist Tanya Gill got her nails painted a shade of hot pink called “F–k Yeah,” laughing, “Ladylike, huh?”

Bryant had earlier stopped by at Kelly Cole’s store opening on La Brea Avenue. “I wanted this store to be a small place where I could come in and experiment,” said the DJ and designer. Many of his friends showed up to support the experiment, including Marisa Tomei, Kirsty Hume, Jordan Feldman, Ione Skye and Pauley Perrette. The 700-square-foot store features Cole’s denim line, which retails on average for $220, and a vintage collection of boots, rock T-shirts and leather jackets. Tomei, dressed in a vintage jumpsuit, said her favorite part of Cole’s collection is the rock Ts. “I always go back to them. They’re classic,” she said enthusiastically.