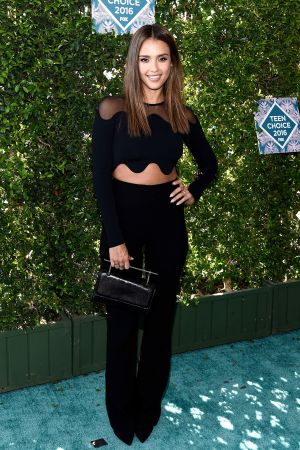 While Shailene Woodley, Ben Affleck, Ryan Reynolds and Jennifer Lawrence were among those nominated for this year’s Teen Choice Awards, the turquoise carpet attracted a slew of up-and-coming tweens, teens and You Tubers alongside “veterans” like Lea Michele, Lucy Hale, Jason Derulo and Jessica Alba. Most bypassed speaking in favor of the air conditioning that waited them inside The Forum in Inglewood, Calif., on Sunday afternoon, where the live show was filmed to air on Fox.

Ever the pro, “Modern Family” star Nolan Gould, who was practically raised on the red carpet, gamely stopped every few feet. “I’ve been here like six years or something, so I know the drill. There’s not a lot of pressure,” said the 17-year-old. Even so, he said public speaking isn’t quite his forte, if the show should win its Choice TV Show: comedy nomination. “I’m horrible at giving speeches. So hopefully if we win, somebody else will take control.” Luckily his on-screen sister Sarah Hyland arrived shortly thereafter.

Andrea Barber of “Fuller House” admitted she’s less versed in the ways of the red carpet. “Back when we did ‘Full House,’ 20 years ago, there was no Teen Choice Awards. Heck, there was no e-mail when we started,” said the actress, who is enjoying a renewed sense of fame following the Netflix show’s success. Barber attended with co-stars Candace Cameron Bure, Jodie Sweetin and the show’s producer John Stamos.

Newcomer Madisyn Shipman was among the teens who braved the heat in a black midiff-bearing ensemble. The 13-year-old said she was excited to watch fellow Nickelodeon alum Victoria Justice cohost the show alongside John Cena. “I’m hoping to meet her tonight,” said the “Game Shakers” actress, who said it was her father who saved her from a fashion disaster. “My shorts zipper busted this morning, so last minute my dad had to sew it back together. Dad to the rescue!”

Lana Parilla, nominated for her role on “Once Upon a Time,” attended with her teenage son. “We just met John Cena, so he was excited. It’s his birthday. It made his day, so it made my day.”

Nominee Katherine McNamara selected her Christian Siriano dress because of its pretty shade of pink. “I never wear color, but my amazing stylist pushed me a little farther today out of my comfort zone of black,” said the “Shadowhunters: The Mortal Instruments” actress, adding that her individual nomination was “surreal” and “a huge honor.”

Rapper Flo Rida kicked off the carpet by performing his hit “My House.” However, for “The Fosters” actress Teri Polo, music and star sightings were the furthest things from her mind. “I’ve got to pee! They should have port-a-potty’s every couple feet.”