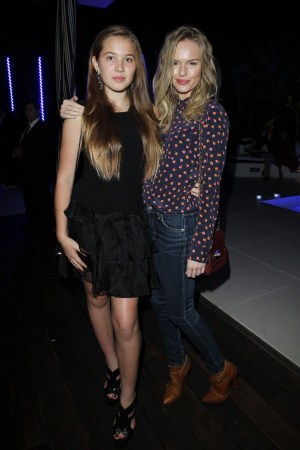 Having parents as plus-ones can have its perks. At Teen Vogue’s Young Hollywood soiree with Emporio Armani in Beverly Hills Thursday night, Leslie Mann scored some serious cool mom points with her daughter, Maude Apatow, by wrangling a pair of matching mother-daughter Rodarte shoes for the event. “I don’t usually wear stuff like this,” giggled the 14-year-old, who squealed over star sightings including the cast of “Awkward.” “I see everyone that I watch on TV. Everyone’s here right now!” she exclaimed.

“And everyone she stalks on Twitter,” added Mann, while her husband, director Judd Apatow, nursed an Amstel nearby.

“We’re not quite officially married yet, but I feel like we’ve been married forever, and I feel like she’s been with me forever,” Bosworth said as she hugged, in her words, “my most special person in the world.”

The actress has already dispensed valuable sartorial advice to Polish, who donned a Rachel Zoe dress for the party.

“I said to her, ‘Whatever she feels great in, she should wear,’” Bosworth advised. “You always have to walk out the door feeling great.”

Other teens managed to leave the ‘rents behind for “one epic night,” as cover girl Victoria Justice put it.

“It’s gonna be awesome,” continued Justice, who grooved along to DJ Connor Cruise’s beats as she waited for Grouplove to take the stage. The Los Angeles band played a 30-minute set that included a cover of Whitney Houston’s “I Wanna Dance With Somebody,” a song released well before the many guests without a 21-and-over stamp had been born.