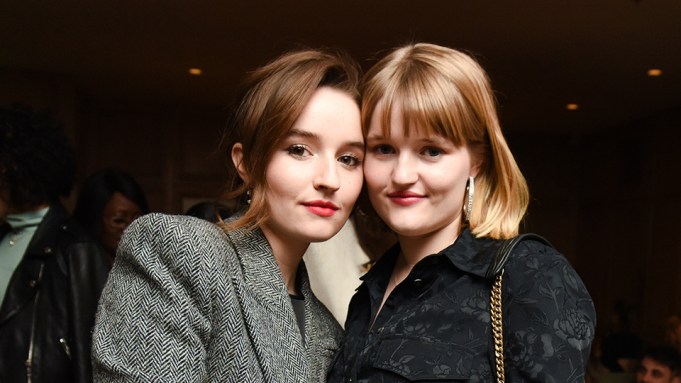 While the 2020 presidential election got underway with the Iowa caucus, Hollywood’s rising talents had other, more lighthearted matters in mind on Wednesday night. With the Oscars just days away, conversation around the dinner table at Teen Vogue’s annual celebration of its young Hollywood issue cover stars centered on the best picture nominees.

“It blew my mind,” Millicent Simmonds, one of nine to grace the cover, said of “Parasite,” the Korean thriller by Bong Joon-ho. The 16-year-old deaf actress starred in 2017’s “Wonderstruck” and 2018’s “A Quiet Place.” “I love the story. I love the acting. How in the world the director thought of that and wrote that story blows me away. You have no idea what’s coming and what to expect. I think that’s why it really hits you.”

Other cover stars who came out included Kelvin Harrison Jr., who’s nominated for best male lead for “Luce” at the upcoming Film Independent Spirit Awards, and Sofia Carson, who shared that she was rooting for Sam Mendes’ “1917.”

“It really stayed with me,” she said, wearing Givenchy. “I was also going to say ‘Little Women,’ but that unfortunately was not nominated. But ‘1917’ was a big one for me. It was shot so spectacularly and told such a powerful story.”

The event, held in a private room at the members-only San Vicente Bungalows in Los Angeles, was hosted by editor in chief Lindsay Peoples Wagner in partnership with Revlon and Italian footwear brand AGL. Also out were Paris Jackson, who stopped by during cocktails, Australian actress Danielle Macdonald, singer-songwriter Grace VanderWaal, Lexi Underwood — the 16-year-old actress who next stars in Hulu’s anticipated “Little Fires Everywhere” — and Kaitlyn Dever, who recently returned from the BAFTAs where she was nominated in the rising star category.

“It was amazing to be in that room,” she shared. “It’s such a big theater. They really capitalize that category. They single out everyone and play clips from each artist. It just felt so surreal.”

The 23-year-old actress, who brought her sister Mady as her date for the night, has had success with two films recently, playing a gay character in Olivia Wilde’s teen comedy “Booksmart” and taking on the role of a rape survivor in Netflix’s miniseries “Unbelievable.”

“It just feels like I’m doing exactly what I want to be doing, exploring different parts of my acting muscles,” she continued. “What more can I ask for? Doing a fun, loose comedy and then doing an emotionally draining type of role. I know both are also really important for the world to see.”

Dever has been making strong fashion choices this awards season. It’s no surprise she works with renowned stylist Karla Welsh. “She just puts things on me, and every day I’m continuously shocked that she knows me so well,” she said. Tonight, she opted for a dress by David Koma. “She gets who I am and who I want to be, what I want to wear, what I don’t want to wear, what makes me comfortable. It just feels so good.”