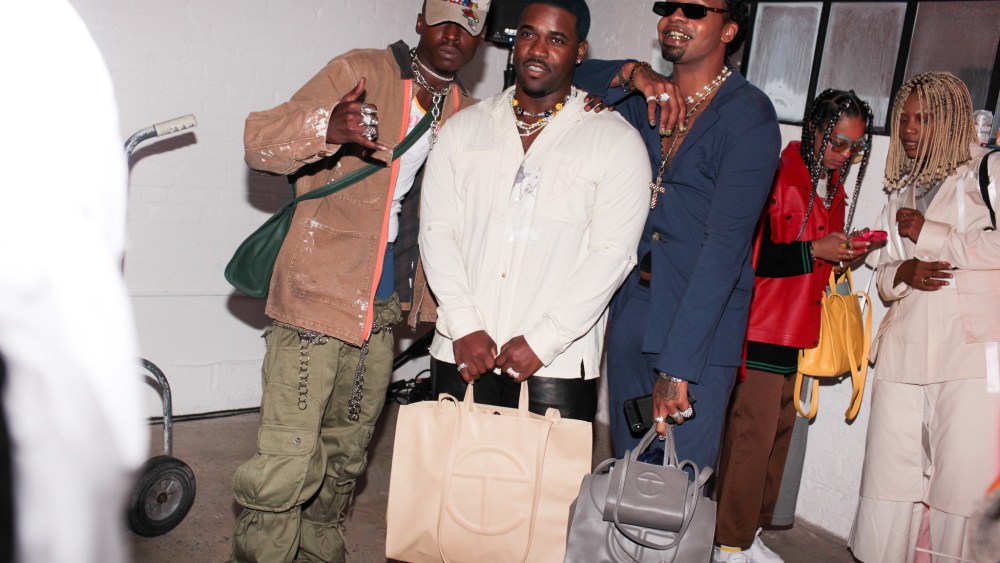 “Telfar literally birthed everything in this culture. This is the first brand and the first designer I can say whose name actually means something in New York City,” said singer Ian Isiah. “We haven’t had that since the Nineties.”

Telfar may be headed to Paris for its runway show this season, but it didn’t sit out NYFW completely.  The brand hosted a party in Brooklyn’s Bushwick on Friday night to celebrate a short film featuring the new collection, “The World Isn’t Everything,” and many of the film’s collaborators, dressed in Telfar, stopped by 99 Scott to take in its first screening and grab a snack from the White Castle truck parked out back.

“I wrote a beautiful song for it; I believe it’s showing in Paris,” Isiah added of his involvement; the film will continue to grow as it migrates from New York. “I even got Telfar [Clemens] on the track for it, too, so Telfar’s going to be singing.” Like many involved in the project, Isiah — also an integral part of the Hood by Air family — has been a longtime friend and collaborator of the brand.

As the film screened on repeat inside the dark venue, guests including A$AP Rocky and Young Paris perched atop the few crates set out for seating, the same crates floating in the ocean onscreen upon which the models in the movie don pieces from Telfar’s new collection. The film also features actor Ashton Sanders, performing dialogue penned by Jeremy O. Harris.

“It literally only happened because [Telfar creative director Babak Radboy] came to my house with a new computer, because my computer was broken, and sat next to me and was like ‘you will finish,'” said Harris.

The buzzy playwright, who’s in tech rehearsals for the Broadway debut of his “Slave Play” this fall, had stopped by the party during his dinner break. “I’m going to go back to watch our run in five minutes,” he said. Harris met Clemens and Radboy a few years ago, but first collaborated with the brand last season, writing the monologue that opened its runway show. “I think we all felt — him, me, and Babak — that there was a real alchemy in our collaboration, and so when they started making this film they reached out to me about doing something,” he added.

“So I wrote a series of monologues about migration and what it means for a body to move and why a body might want to move, why it might want to travel, why it might want to soar up into the sky,” he explained, throwing out the various references he drew inspiration from. “I think it’s so important to be thinking about who can claim Americana and American iconography. Walt Whitman is so ingrained inside our psyches, and what does it mean to take Walt Whitman and Bette Davis and put them inside of Telfar’s world and say like, ‘we’ve now appropriated this.'”

One could almost forget that the film is also about clothes.

“The freedom the clothes leant me in my imagination… when I was wearing the new collection, I felt like I was floating the entire time,” Harris added. “There was something about the lightness of the fabrics, and there’s a sort of memoryscape that’s placed onto a lot of the interpolated images inside of the T-shirt I was wearing that made me feel like when I started writing this, I had to write about that sense of suspension and release.”