Tommy Hilfiger was cohost of the annual fund-raiser for the gallery in Hyde Park. 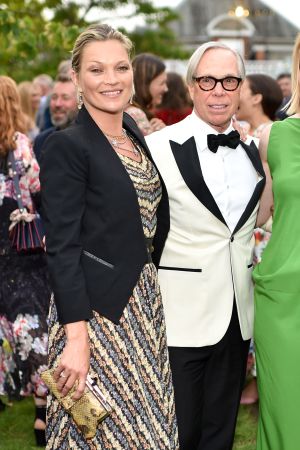 WORKING CLASS: Britain may be going through a rough time with its ties to the rest of Europe, but it was certainly feeling the American love on Wednesday night as Tommy Hilfiger cohosted the Serpentine Gallery’s annual summer party, a highlight of the London summer calendar.

“They don’t have parties like this in the States; they don’t have big outdoor, incredibly memorable artistic events like this,” Hilfiger said. “America is great and fantastic for more of a pop culture approach, but when art meets fashion and music and architecture, then that’s interesting. But I was so worried it was going to rain. They’d put up a tent, right?” he added, eyeing the buckets of golf umbrellas that were the only weatherproofing measures evident.

Cressida Bonas, the actress and former girlfriend of Prince Harry, said she’s been busy with the big screen and the theater. She recently finished performing in a one-woman play “An Evening With Lucian Freud,” in London and said it was a vastly different experience to the three months she spent in Cleveland, Ohio, filming “The Bye Bye Man,” a horror flick that is set for release late this year.

“I stayed in a hotel for three months, which was weird because Cleveland’s great — but it’s not like New York. It was fun; an amazing experience,” she said.

Like Bonas, Sharleen Spiteri is barely pausing for breath before her next act. “I finished touring at Christmas, after two years on the road,” she said, adding that she’s set to perform at the British Formula 1 at Silverstone this Friday. “Then I’m working on a new Texas album for 2017.”

Gareth Pugh and Ty Wood were among a big cluster of guests watching Portugal beat Wales 2-0 in the European Championships on the big screen.

This year’s Summer Pavilion, which will remain on display on the grounds of the Serpentine until October, features a flat wall opening into an open space. By day, it houses a café and free family activities and by night it becomes a space for the Serpentine’s Park Nights program of performance works. The pavilion’s summer houses were inspired by Queen Caroline’s Temple, a nearby classical style summer house built in 1734.

The pavilion was designed by Bjarke Ingels Group and the summer houses were created by NLÉ, Barkow Leibinger, Yona Friedman and Asif Khan.