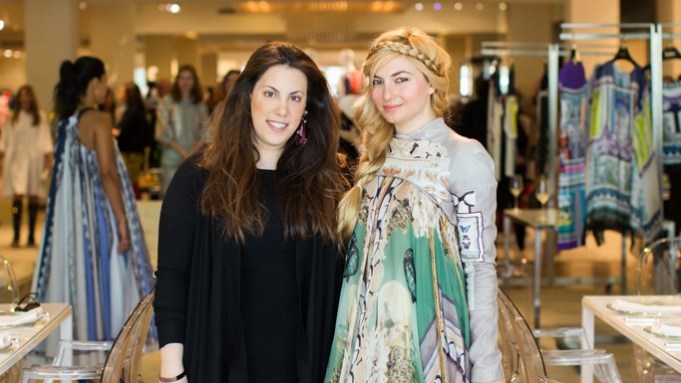 Last week was Dallas’ first official Arts Week, but it was also a fashion fest.

The planned overlap of the Dallas Museum of Art’s annual ball with the Dallas Art Fair and a fashion exhibit at the Dallas Contemporary drew a bevy of designers to the city, including Viktor & Rolf’s Viktor Horsting and Rolf Snoeren from Amsterdam, VBH’s Bruce Hoeksema from Rome, Mary Katrantzou from London, Walter Van Beirendonck from Antwerp, Belgium, and Lela Rose from New York.

“It’s like Dallas Fashion Week,” observed Brian Bolke, the Forty Five Ten co-owner, who invited Horsting and Snoeren. “If you think about Art Basel, it’s very much the same. There are as many fashion-driven parties as art parties, and it’s because those worlds have collided so much.”

Dallas is known for its big-spending collectors of contemporary art, and supporting the arts can have a direct impact on fashion sales, according to Bolke and other retailers.

“Business has been really crazy,” said Gable Shaikh, co-owner of Hadleigh’s boutique, which gave a $6,000 package to the auction. Scanning the black-tie crowd of 800 at the DMA ball, Shaikh observed, “We do custom bow ties, so we have lots of guys here in bow ties.”

“Everyone is so welcoming, and in terms of their appreciation of design, I was really impressed,” observed Katrantzou, whose close friend Nasiba Adilova, a Russian style blogger, urged her to visit during Dallas Arts Week. Katrantzou’s inaugural trunk show tour of Neiman Marcus stores has been a success, selling about 60 pieces at each trunk show, she said.

Since its opening fete 13 years ago, Forty Five Ten has backed the DMA and routinely hosts a marquee designer for the Art Ball or preceding patron party. But the ball’s fashion profile spiked this year thanks to cochairs Jennifer Karol and Catherine Rose, who pressed for special auction donations like visits with designers Viktor & Rolf, Hoeksema and Rose.

“It helps to be related to them,” quipped Catherine Rose, referencing her sister-in-law Lela. “Seriously, we have wonderful friends — Brian Bolke at Forty Five Ten, Bruce Hoeksema/VBH, the Neiman Marcus team, Hadleigh’s, Akris, Christian Dior — all of whom are wonderful supporters of the visual arts and the DMA. Dallas loves fashion and great design. Having designers attend Art Ball adds to the overall creative vibrancy of the evening.”

Before the ball, Horsting and Snoeren were escorted to top private contemporary art collections in Dallas, including the Rachofsky House, Beck House, The Warehouse and the homes of Marguerite Hoffman and Derek and Christen Wilson.

“I didn’t know this existed on such a scale,” added Snoeren. “The art collections are amazing.”

The pair were headed to Paris, where they expect this week to sign a lease for their first flagship in a “very central” location.

“It’s very exciting,” Horsting said. “Paris is our fashion home. It will have men’s, women’s, handbags, shoes, and we’re adding bridal for spring 2014.”

Hoeksema’s visit was coordinated by his Dallas-based attorney, DMA supporter Yvette Ostolaza, who organized private shows of his luxury bags and fine jewelry.

“This is a huge market — one of the most important metro markets in the U.S.,” Hoeksema said. Another goal of his American sojourn was to nail down a location for his second U.S. store, at the Bal Harbour Shops in Miami.

Cartier also upped its patronage of the Art Ball, footing the bill for the lobster and wagyu tenderloin dinner, and presenting six models draped in diamonds and sapphires worth millions.

The Joule was also a sponsor of the Dallas Art Fair, which marked its fifth year with 83 contemporary galleries filling all available space at Fashion Industry Gallery. The Art Fair’s preview gala Thursday attracted 1,000 guests and benefited the DMA, the Nasher Sculpture Center and the Dallas Contemporary.

Van Beirendonck was in town to present 36 “top to toe” men’s fashions on revolving mannequins at the Dallas Contemporary and also to style two windows for Traffic Los Angeles’ men’s store.

After walking the Art Fair gala, Van Beirendonck pronounced the offerings “good” and “comparable to other fairs.” But he and his partner, fashion designer and ceramicist Dirk Van Saene, seemed more interested in the natives. “The women are fascinating,” said Van Beirendonck, wide-eyed at the abundance of cosmetic enhancements.

“I tried to take pictures of them,” Van Saene added, “but you can’t say, ‘Turn around.’”

Herrera had a different point of view. Speaking at her boutique at a benefit for Equest equine therapy, Herrera said she fell in love with Dallas when she did her first trunk show in the city 30 years ago at the now-defunct Lou Lattimore.

“The people are so free and they love fashion,” Herrera said. “They look great.”