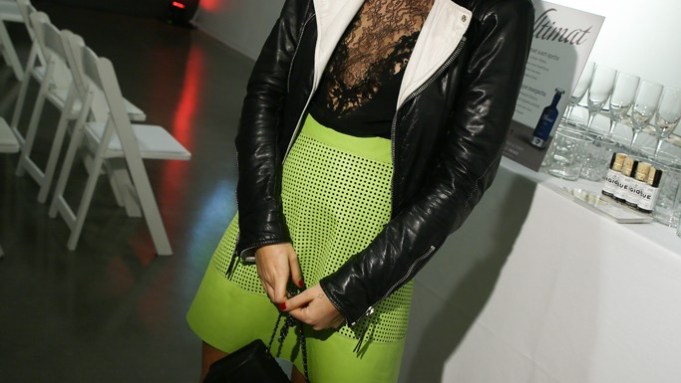 The silent auction at Monday night’s RxArt annual fund-raising soiree started out much like a game of chicken, with nearly all of the pieces — from the likes of KAWS, Cass Bird, Max Snow, the night’s honoree Dan Colen and other cool kids of the art world — remaining bid-free for the first couple hours of the night.

“I love this,” Elizabeth Gilpin, in a leather pair of overalls from 3.1 Phillip Lim, said, gravitating toward “Girl With Rainbow Hair,” a Terry Richardson print of a topless woman, her multichromatic locks cascading down her back. “Maybe we’ll jump in and bid after a margarita,” she said to Arizona Muse, her date for the evening.

Indeed, after a few cocktails, the crowd’s reticence subsided and the giving spirit was in full swing at the Milk Studios-held fete. “The Rita Ackermann piece, that’s the one I want,” said Chrissie Miller, who was holed up in one of the gallery’s corners with a messy-haired, red-lipped Harley Viera Newton. “I probably won’t get it, though. I’m not an aggressive bidder at all,” she continued. “I find, like, the cheapest thing in the room and just bid on that.”

For Yvonne Force Villareal, an impulsive, speedy purchase was the way to go. “I actually have to get myself to a gala after this, so I’m going to do a quick spin. I’m going to find something and put my bid on it,” she said. “I don’t know what it is, but I have, like, two minutes to go find it.”