The organization threw its fifth annual gala at The Pierre hotel in Manhattan on Monday night, with guests like Michelle Harper, Cynthia Rowley and Bill Powers. 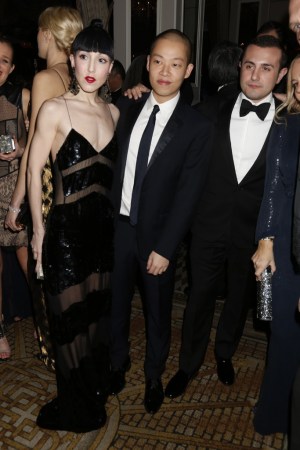 “I’m very excited to wear my dress, and I’m especially happy that I work with the decor of the room,” said Jean Shafiroff, wearing a hot pink Zang Toi number.

Wu’s slightly tardy arrival was met with a flurry of hugs, air kisses and photographer squawks. The man of the hour walked in with a troupe of gazelles — Martha Hunt, Hilary Rhoda, Shu Pei and Liya Kebede — all of whom donned the designer’s dresses.

Rhoda was looking forward to spending the coming weekend in Southampton. “I haven’t been able to get out there all winter,” she said. “I need to stop making excuses. My mom and I have a place with our dogs. Hopefully it won’t be snowing.”

Anna Sui, arm-in-arm with her date Hanne Gaby Odiele, had just returned from Japan.“I was talking at a seminar at Aoyama Gakuin University and I had a store opening there, too. It was crazy because it was 70 degrees and sunny and you felt like the cherry blossoms were about to pop and then the sky went dark and in came this huge dust storm from China. The whole sky turned yellow,” she said. “It was totally science fiction.”

After a brief welcome from Asia Society’s museum director Melissa Chiu, Wu took the stage with a nervous energy. “When I grew up in Taiwan, it was very clear to me that I wasn’t going to be your average doctor, lawyer or accountant. In fact, I’d highly discourage myself from doing any of your taxes,” he said. “But my parents encouraged me to do what I wanted to do. I wanted to acknowledge them because they couldn’t be here; they are in Taiwan. Because they think New York is too dirty. And it is a bit dirty, but I love it.”