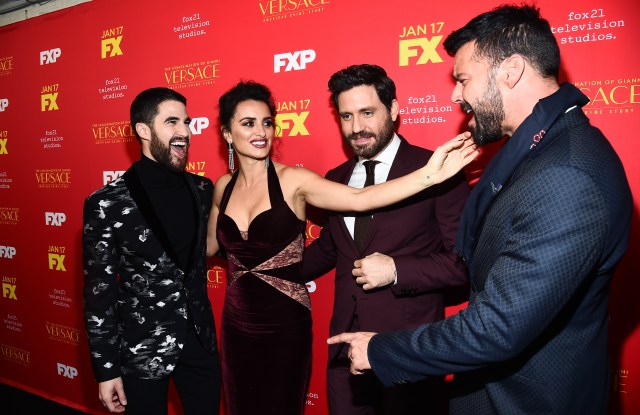 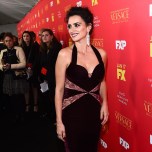 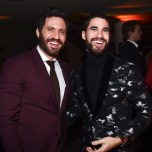 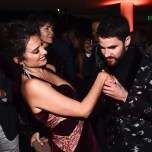 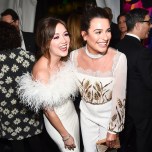 Ricky Martin, Penélope Cruz, Édgar Ramírez and Darren Criss, stepped out at the premiere of their new series, “The Assassination of Gianni Versace,” the second installment of Ryan Murphy’s “American Crime Story” franchise. While the Versace family recently released a statement denouncing the project as “a work of fiction,” Murphy was quick to mention that Cruz had received a kind gesture from her onscreen alter ego. “Donatella Versace sent Penelope Cruz a huge arrangement of flowers yesterday,” he shared.

“It was very nice,” said Cruz, who stars as Donatella in the nine-episode series, which makes its debut Jan. 17 on FX. “I don’t know if she has seen [any episodes yet], but it’s a personal thing. For me, it really made me smile. It made me happy.” The actress said she admires Donatella’s passion and success in running an empire. “She had to do that in a moment when she was devastated and she proved to be strong. That was a very generous thing to do because I’m sure she did it also for him.”

“Look, maybe it will be too painful for her to [watch], but I think we treat her with a lot of respect and dignity,” added Murphy. “I really admire Donatella — like I really admire Marcia Clark. I think Donatella Versace was a woman who, out of the blue, was asked to carry on a billion-dollar company and keep her family business going and intact and was up against a board of directors and lawyers who were all men and were trying to tell her something contrary to what she wanted to do. I really admire what she was able to do and continues to do.”

Cruz said she spoke with Donatella in advance of filming. “We had a long conversation when Ryan offered me the part,” said Cruz. “I needed to talk to her about it before I moved forward.” Once she accepted the role, Cruz prepared by combing through interviews with Donatella on YouTube in order “to capture the essence of this wonderful woman.”

Ramírez plays the role of Gianni Versace. “It’s such a great opportunity and such a great privilege to step into the shoes of one of the most creative minds of the 20th century,” said Ramírez, who wore prosthetics as part of his physical transformation. “He’s a genius that affected culture and changed it. Gianni was a disruptor. Gianni did things that no one else had done before….He was the designer of his time and for me that’s incredible to play.”

While Ramírez spoke with a few of the late designer’s friends to prepare, he didn’t read Maureen Orth’s “Vulgar Favors: Andrew Cunanan, Gianni Versace and the Largest Failed Manhunt in U.S. History,” the book upon which the show is based. “Andrew Cunanan has nothing to do with his life,” he explained. “He has to do with his death, so I wasn’t interested in Andrew Cunanan. I didn’t want to put those ideas in my head.”

Criss was tasked with tackling the role of serial killer Cunanan. “I feel like I made varsity,” Criss said of being cast on the show. “I get to be on an FX show, another Ryan Murphy show. The fact that it’s a second season for a show whose stripes are already proven in quality and content. Then I get to be in a project that has a character that is extremely compelling and is an actor’s dream to work on — not because of it’s darkness or the violence that it involves but because of the colors of emotional arcs that he carries with him. And on top of that let’s not forget the bonus that I get to hang out with a bunch of movie stars which is certainly a thrill. My head explodes a little bit [when I talk about it] and it did every day going to work. This is a once-in-a-lifetime opportunity.”

Murphy said that the project features his dream cast. “They were all my first choices,” he shared, adding that, despite rumors, Lady Gaga was never in the running for the role. “She was never available. She was doing ‘A Star Is Born’ when we were casting it.” Murphy added, “I always wanted to work with Penélope. I liked that she was friendly with and knew Donatella very well. I’ve been friends with Penélope for almost 10 years and I’ve always wanted to work with her, but we could never find the right piece or the right timing. Finally this worked.”

Famous guest stars include Max Greenfield, Finn Wittrock, Michael Nouri and Judith Light, the latter of whom wore Christian Siriano to the premiere. “I remember hearing the news,” said Light, who appears on the third episode as Marilyn Miglin, a powerful businesswoman whose husband is murdered. “My parents were living in Florida at the time and they lived in Pompano Beach, which is near Miami. He was iconic and it was shocking — how this could have happened when there were so many things that fell by the wayside.”

Beyond the headlines, Murphy said the project is, at its core, “about something I lived through which was homophobia in the Nineties and the trickle-down effect of ‘Don’t ask, don’t tell’ in our country. I also think it’s about great beauty and great destruction and it answers the question, ‘How does one person become a murderer?’ And how does another person become a creative genius? Both things don’t just happen, so we examine that.”