WWD’s art world correspondents fanned out across the manses and hotels of southern Florida to report back on the goings on in the art scene. 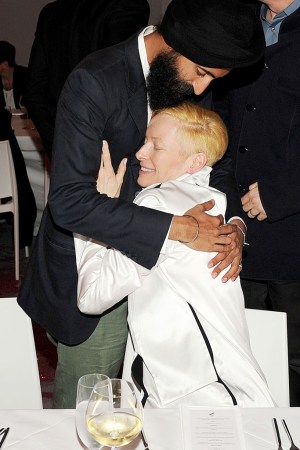 Art Basel Miami Beach came and went over the extended weekend in a flurry of bright colors and corporate-sponsored synergy. WWD’s art world correspondents fanned out across the manses and hotels of southern Florida to report back on the goings on in the art scene.

• Stefano Tonchi squinted his eyes as he walked inside the Pringle of Scotland pop-up store Friday night in Miami’s design district, the doctor’s-office lighting demanding attention for the brand’s new accessories collaboration with artist Liam Gillick. Those making the trek from South Beach included Pringle of Scotland “brand ambassador” Tilda Swinton. “I’ve lost my voice, what do you want?” she asked, when a reporter walked up to ask a few questions. “I’m sorry, I’m just here with friends and here to support the brand.” Swinton and her group headed to a stark white industrial space just upstairs from the party to dine on baby arugula salad and beef tenderloin. Every inch of the floor was covered in swirls of red glitter and Pringle of Scotland design director Alistair Carr hoped it would get a little messy as the festivities wore on. “I hope people have some fun with it, make their own art.”

• Earlier on Friday, Lanvin had planned to hold a cocktail party outside the W South Beach hotel but moved guests indoors to a lobby bar when confronted with rain. The party continued with dinner on the terrace of the recently opened restaurant, The Dutch, to fete the close of Lanvin’s two-year sponsorship of the Rubell Family Collection’s annual exhibition.

• A few blocks away, Naomi Campbell, Bruce Weber and Gina Gershon made a late appearance at the Dsquared2 and Vman dinner at The Webster. “I just flew in and I’m leaving tomorrow,” said Stephen Gan. “I’m playing catch-up on everything that’s happened here.”

• Following dinner, Gan and his crew headed to the Visionaire party at the Delano. “There isn’t as much wackiness as previous years of Art Basel,” complained Gan’s Visionaire cohort, Cecilia Dean, at the magazine’s soiree, right before she injected a percussive blast of wackiness with a troupe of Brazilian carnival dancers and drummers who jiggled enthusiastically around the packed party, feathers flying. The evening celebrated Visionaire’s upcoming Brazil-themed issue, which is out next year in a 3-D Stereoscope format. Adrien Brody, Gareth Pugh, Jean Pigozzi, Bebel Gilberto, Yigal Azrouël, Cynthia Rowley, Eddie Borgo, Klaus Biesenbach, André Balazs, Richard Phillips, Kyle DeWoody, Lance Bass and a trio of Misshapes cavorted in cabanas lining the pool, while Brazil’s Melissa shoes showcased its latest collaboration with the Campana brothers.

• A few steps away, another party at Delano, hosted by Grandlife at Le Baron, ensured that the entrance to the Delano was mobbed and virtually impossible to enter after 11 p.m.

“You know all my clothes are at FIT right now, so I don’t have a thing to wear,” said Daphne Guinness of her punk black-and-white denim outfit, while lounging on a banquette and chatting with Jefferson Hack. “I tend to get dressed in the dark.”

• Johan Lindeberg, sporting his wizard beard, was critical of the art at the many fairs around town. “This year is the new 1968 with all the riots and the financial system collapsing. It’s a very emotional time and I don’t think the art reflects that at all,” he said. “It’s all too controlled and too establishment and directed toward buyers and curators. I didn’t see anything that reflects the revolution happening right now and the changing values of the time and the strength of the people.”

Lindeberg may have to wait until next year to see some new artistic thinking when Paris Hilton plans to show her works at Art Basel.

• “I do drawings and photography and big paintings with a lot of collages and Swarovski crystals; I’m going to do an exhibit here next year,” promised Paris Hilton at the Vogue/Missoni/Nordstrom fete at Loren and J.R. Ridinger’s expansive Casa de Suenos mansion on Saturday. Hilton recently acquired a two-story building in West Hollywood where she plans to open a Warhol-style Factory space, replete with her own recording studio and art studio. “Andy had the most amazing people at the Factory and I know if I was alive then, I’d be hanging out there,” said Hilton. Asked what she thought of the fallout from the Kim Kardashian divorce, Hilton said she never watched television apart from “The Real Housewives of Beverly Hills,” which stars her aunt, Kyle Richards. “I haven’t really thought about [Kardashian]. I’ve been traveling and visiting orphanages in Bali. I think there are more important things going on in this world,” she explained.

• Angela Missoni, who staged a poolside fashion show at the party, said her next big project would be Missoni’s 60th anniversary in 2013, following the blockbuster Target collaboration of this year. “I also have my daughter Margherita’s wedding next year. That will take a little bit of my time,” she said with a laugh.

RELATED STORY: Ever Manifesto Brings Some Green to Basel >>

• Later in the evening, Gareth Pugh and Byrdie Bell hosted a dinner at the recently relaunched Baoli-Vita restaurant, which, true to the designer’s avant-garde sensibilities, featured Dom Perignon-toting waitresses wearing nothing but a glaze of white body paint. “This is my first time here for Art Basel and it’s pretty amazing to be in the sunshine as we left a very grim London behind,” said Pugh, who was celebrating his own collaboration with Melissa shoes. “My collections tend to sell in very select doors and it’s really nice to be able to reach out to people who want a little bit of what I do with the shoes.”