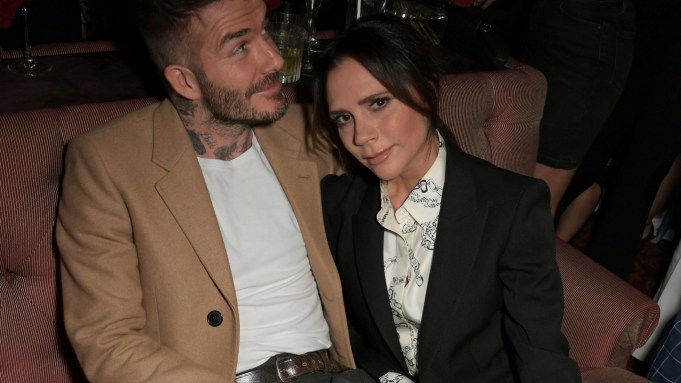 SPICY: When Derek Blasberg throws a party, it’s a pretty safe bet it’s going to be a rollicking affair. Throw YouTube and the Beckhams into the mix and you have quite the hootenanny.

That triumvirate of enticements turned Mark’s Club in Mayfair into a heaving party as actors, designer, models and other sundry VIPs all gathered to celebrate the launch of Beckham’s YouTube channel (which was announced in November), and her fall 2019 collection, which was live-streamed exclusively on YouTube earlier in the day.

“I know the perception of YouTube is not the premier place that people would go for fashion content,” said Blasberg during a breather from the festivities. “But I think that once you sign up a Victoria Beckham, a Naomi Campbell, a James Charles, Patrick Star, a Nicola Formichetti, a Violet Chachki, we’re building up a corpus of fashion creators so that when you want to learn how to do a smoky eye, tie a bow tie, do an updo, you’ll be like, ‘I’ll just go on YouTube’, and learn how to do it.”

He knows; he’s done it himself. “I don’t watch YouTube tutorials so much recently because I know everything now,” he joked, “but when I didn’t know how to tie a bow tie, I learned how to do it on YouTube. And I’ve had to watch it more times than I’d like to admit. It’s harder than it looks.”

The Beckham family turned out to support Victoria, who was pinging between guests as diverse as her chief executive officer Paolo Riva — they were talking about the brand’s sales plans in Paris — and a Rubenesque drag queen wearing a wig that was part Dolly Parton, part Marie-Antoinette.

David Beckham had to strip down to his white T-shirt because it was so hot inside the club. No room here for his beloved — and woolen — “Peaky Blinders” wardrobe, part of a collaboration with his label, Kent & Curwen. He did keep his flat cap in hand, though, as he worked the crowd.

Things reached fever pitch during a surprise performance by drag troupe The Spice Gurrls, who performed energetic renditions of Spice Girls hits “Spice Up Your Life” and “Wanna Be.”

“When they all came out we were really excited about them but only one had a beard — Posh Spice,” Blasberg said. “Victoria looked at me and was, like, ‘You couldn’t find one without a beard?'”

“But, funnily enough, I don’t look like Geri,” she deadpanned.

Upstairs, bickering ensued when the Spice Gurrls were at odds about how they should pose in front of a big digital camera that was set up for guests. “Listen to me, it’s my bloody party!” insisted Posh. Fair enough.