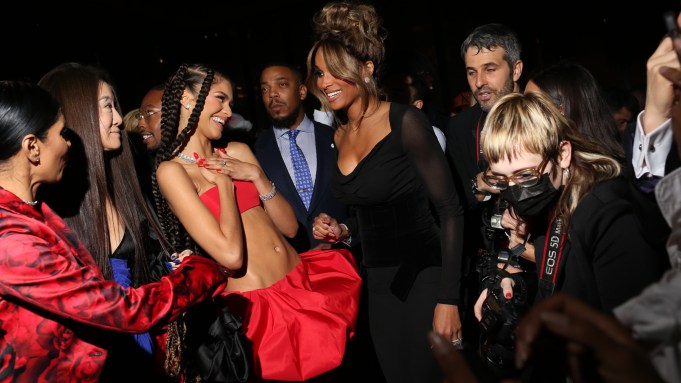 This year marked the return of the party scene — with safety measures and precautions in place. In-person events picked back up in late spring, with small outdoor and socially distanced gatherings. The New York Botanical Garden hosted its spring gala before the social set headed east to the Hamptons for the summer.

In Europe, summertime film festivals brought out the A-list crowd to events hosted by brands including Kering, Chopard, Chanel and Louis Vuitton, and the ever-lavish amfAR gala during the Cannes Film Festival. In New York, amid uncertainty around COVID-19 and the emergence of new variants, fall parties picked up steam with fashion week and the starry-as-ever Met Gala in September. The CFDA Awards reunited the designer-celebrity set again in November with an awards ceremony held at The Pool + The Grill, where Zendaya was honored with this year’s Fashion Icon award. The fall season also saw the return of hallmark benefits including the American Ballet Theatre’s fall gala, the Dior-sponsored Guggenheim International Gala, American Natural History Museum gala, and — after a jaunt down to Miami for Art Basel — the Chanel MoMA film benefit, which honored Penélope Cruz and served as the last major fashion event of 2021.

In Los Angeles, Gucci took over Hollywood Boulevard for its “Gucci Love Parade” show in November, and later in the month — at long last — the Academy Museum opened its doors in November with a bash that drew the likes of Robert Pattinson and H.E.R. Closing out the year on the West Coast were events hosted by Tom Ford and Ralph Lauren, and in Europe parties thrown by Dior Men’s and Prada at the Tate Modern in Europe.

From New York to L.A. and Europe (and everywhere in-between), here’s a look back at the year’s most memorable party moments in photos.

The Year According to DeuxMoi

The Ubiquitors of Fall 2021 Social Life in New York City

Year in Review: What Exactly Is the Metaverse? The Simplest Explanation of What It Means for Fashion