Tilda Swinton, who had offered to cohost a party, called in sick Thursday night to the actual event. 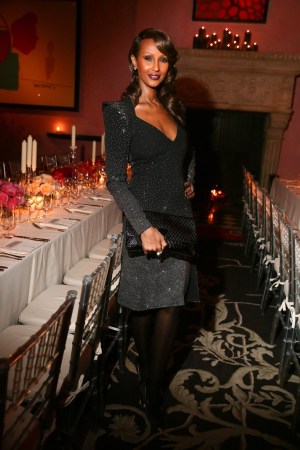 Tilda Swinton is often the most-gawked-at woman in any room she’s in. Unfortunately, Swinton, who had offered to cohost a party with W magazine, along with sponsor Tod’s, for its 40th anniversary, called in sick Thursday night to the actual event. And so the role of beautiful oddity rotated among a couple of women. Michelle Harper was swarmed by people the minute she stepped into the Gramercy Park Hotel’s candlelit Rose Bar for a dinner for about 30 guests, including the singer Estelle, Iman and Miranda Kerr. Harper was a vision in sparkles in a Peter Pilotto gown and blindingly bright earrings. Then iris Apfel walked in and, suddenly, there were two peacocks in the room. Standing side by side, they looked like master and trainee.

Asked about the similarity, Harper said, “That’s the biggest compliment in the world. Iris is a goddess.”

Apfel, sporting a plush Ralph Rucci suit and a red poofy purse that looked like a stuffed Muppet, returned the compliment.

“I don’t know Michelle very well. I’ve met her a few times, and she always looks fabulous,” Apfel said. “She seems to be offbeat, which I like.”

For the after party at the hotel’s terrace, W convened a hodgepodge of a crowd that included familiar faces — Alexander Wang, Amanda Hearst, Nicky Hilton — but also, a couple of recurring “30 rock” actors, Cheyenne Jackson and Nina Arianda.