The Brazil Foundation Heats Up the Met

A wave of South American heat flooded the Metropolitan Museum of Art when the US-based nonprofit Brazil Foundation had its 8th Annual Gala last night. 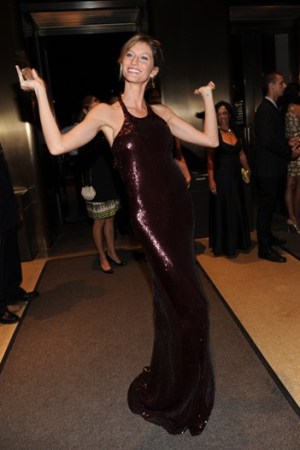 Thursday evening a wave of South American heat flooded the Metropolitan Museum of Art when the US-based nonprofit Brazil Foundation had its 8th Annual Gala, sponsored by Itau, Vale and Grendene. Themed The New Brazil, the event drew a cavalry worth of bronzed models like Jeisa Chiminazzo, Carlos Mota and co-chairs Andrea Dellal and Francisco Costa. Just what accounts for the ongoing love affair between Brazil and fashion?

This story first appeared in the September 27, 2010 issue of WWD. Subscribe Today.

“Everybody thinks Brazil is about a sexy kind of feeling. It is about that but it’s also about every type of sexiness: chic sexiness, a mix of a very feminine look, we are about very feminine things. It’s very light, we’re very creative,” offered model Fernanda Mota, who also spoke later in the evening with Vik Muniz.

Of course, no gala in his country’s name would be complete without Gisele Bundchen, arguably the nation’s most famous export. The bombshell arrived arm-in-arm with her sister Patricia, who did double-duty as a crowd controller of all the well-wishers and fans.

After a performance by pianist Joao Carlos Martins, guests headed into the Temple of Dendur for dinner, where UNESCO’s Irina Bokova spoke, Angela Gutierrez, Eduardo Gouvea Vieira and Jair Ribeiro were honored (predominantly in Portuguese, making things a bit tricky for English-speakers) and chair Nizan Guanaes kept tabs on the money raised that evening.

“I have the most beautiful check on earth,” he announced around 9:45pm of a $50,000 donation from Bundchen. “I think I’m not going to discount the check written by Gisele. I’m going to keep it.”

Afterwards, guests were off to the Boom Boom Room for an after-party hosted by Lorenzo Martone and Amanda Setton where they were joined by Kevin Spacey and Anne Hathaway.