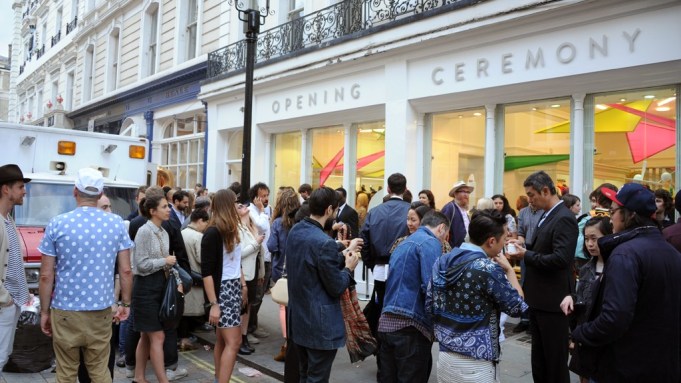 Opening Ceremony is planting its multihued, animal-print flag in London this week with the opening of its first European outpost, in Covent Garden. The 3,000-square-foot pop-up store at 31-32 King Street — in a former Hackett site — will operate until October, when a larger, permanent unit is set to open a few doors away. The move to London marks the 10-year anniversary of Opening Ceremony, which already has outposts in New York, Los Angeles and Tokyo.

The pop-up, which spans two levels, is packed with exclusive 2012 Olympic-themed ready-to-wear and accessories, such as the Proenza Schouler PS1 bag reworked in shiny gold, and Barton Perreira sunglasses in gold, silver or bronze. It also stocks the store’s best-selling capsule collections from days past, including colorful graphic Vans by Kenzo, animal-print ponyskin Keds and Opening Ceremony own-label cat sweaters, which have been reissued in new colors and in men’s sizes.

“We’ve wanted to open in Europe for quite some time — we’ve got a good wholesale business here already, and a really big British customer base online,” said Carol Lim, who cofounded the store with Humberto Leon, during a walk-through this week.

Leon added that the store is very much about the American and international roots of Opening Ceremony — there are myriad new and updated archive pieces by Norma Kamali, reversible dresses by Kenzo, Reyn Spooner Aloha shirts, Pendleton blankets and bags.

Leon and Lim said they are eager to support emerging British talent as well, such as Christopher Shannon, Lou Dalton and Henry Holland, who’s done a red, white and blue Olympic-inspired capsule collection for Opening Ceremony. “I want this to be a home for them, too,” he said.

On Thursday, a rare warm evening in London brought out guests including Delfina Delettrez, Holland, Peter Jensen, Dalton and Perez Hilton to celebrate the temporary digs. For her own Olympic-themed collection, jeweler Delettrez had fashioned earrings and rings in the shapes of pointy fingers, their nails painted with the U.S. or U.K. flags. “I imagined during the Olympics these girls drawing on their nails the flags of their preferred teams,” said Delettrez, who was part of the crowd who had spilled out onto the street. The designer herself will be rooting for “Italy or France,” although she doesn’t have much Olympics viewing in mind. “I’m going on holiday. I’m going to islands in Italy, near Sicily — I just close myself in my island and that’s it,” she said with a grin.

Danish designer Jensen will be embracing the games wholeheartedly — he’ll be serving as a commentator on the events for a breakfast show on Denmark’s TV2 channel. “I’ll be talking about the [athletes’] uniforms and about London as a city,” said Jensen. “It should be good fun.” And appropriately enough, given their store’s moniker, Leon and Lim will be attending the Olympics’ opening ceremony July 27. “It’s kind of full circle for us,” said Leon, though he noted he hasn’t been privy to the ceremony’s closely guarded content. “All I know is it’s Danny Boyle [director Boyle is the ceremony’s artistic director] and I’m super excited.”