The Couture Court of Versailles

The fashion set feted the conclusion of couture week and the opening of an exhibition about the influence of 18th century France on contemporary fashion. 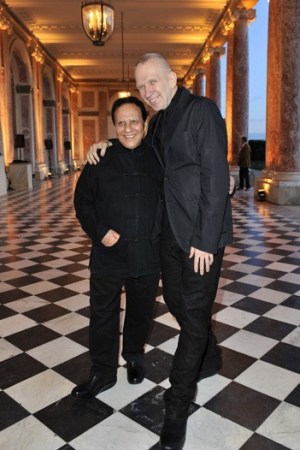 VERSAILLES, France — It was fashion’s night out — Versailles style.

Designers galore streamed through the pink marble Grand Trianon at sunset Thursday night, touring a lavish exhibition of the influence of 18th-century France on contemporary fashion — and blowing off steam in high style at the conclusion of couture week as the Chambre Syndicale resurrected a tradition of black-tie galas that ran full-throttle in the Sixties.

“Isn’t it absolutely romantic; you just want to fade away in this,” sighed Ackermann. Entering the main salon, Valli looked very much at home. “I love it here. Whenever I want to escape Paris, I come to the Trianon Palace hotel and sleep for three days, and then come and walk here, so I always feel very relaxed here,” he said.

Andrew Gn, a fan of the epoch, snapped photos with his smartphone. Most everyone had a favorite piece. For Guillaume de Seynes, deputy managing director of Hermès, it was a deep red leather coat by Gaultier, the house’s former artistic director. Gaultier said the piece was inspired by an antique book. “It’s quite incredible to be at Versailles and to see your designs,” Gaultier marveled. “Except it makes you think that what you have done is not that great — the originals are better.”

Vanessa Bruno said she’d been most moved by the Balenciaga pieces in the exhibition. “I think the whole spirit with the place was just right,” said the designer, who has tapped Kate Bosworth to appear in her latest fashion film, which will be released on the Vanessa Bruno Web site in September. The designer, who has created a line of children’s wear for La Redoute’s fall collection, revealed she’s mulling introducing a Vanessa Bruno kids’ line in the near future.

He’s also compiling a Rizzoli book to mark the 20th anniversary of his business, childhood snaps included, and an exhibition in tandem at Pierre Passebon gallery, right next door to his boutique and headquarters.

“You know it always has to be in the neighborhood with me,” he laughed.

Chloé has an anniversary next year, too, and chief executive officer Geoffroy de la Bourdonnaye said he’s plotting an exhibition, with Olivier Saillard, curator of the Versailles exhibit, doing the honors.

The night ended with a bouquet of fireworks over the palace’s moonlit gardens.