Osteria del Circo provided a recovery room of sorts on Monday night following a screening of the much-lauded tearjerker at the Museum of Modern Art. 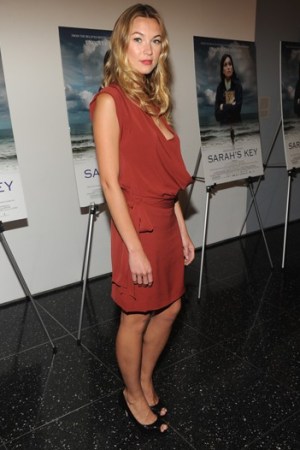 Osteria del Circo provided a recovery room of sorts on Monday night following a screening of “Sarah’s Key” at the Museum of Modern Art. Based on the recent bestseller of the same name, the film details the Nazi occupation of France and its present day repercussions. It is, if a small sampling of the crowd — which included Nanette Lepore, Stavros Niarchos, Rachel Roy, and from the film, French actress Charlotte Poutrel — something of a tearjerker. The arrival of Harvey Weinstein, who produced the film, certainly signaled awards season dreams.

Regis Philbin thought so, too.

“I thought it was fabulous,” the daytime host said as he made his way to a table. “I think it’s going to be nominated, you watch….Listen to Regis!”

“I just thought it was so heartbreaking, but beautiful,” she said. “It has a romantic quality. Very touching.”

A prior commitment kept Malin Akerman from actually taking in the film, but she explained she had still gotten a cry out earlier in the evening.

“I was a judge on ‘Project Runway,’” she explained of her absence. “It was a little bit horrifying when you had to vote someone out. I actually got a little teary-eyed. I did not enjoy that part at all.”