Lulu de Kwiatkowski had a lot to celebrate Thursday night at the party Antony Todd threw for her at his downtown store. 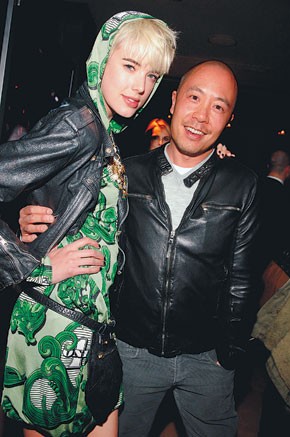 Lulu de Kwiatkowski had a lot to celebrate Thursday night at the party Antony Todd threw for her at his downtown store. Not only was the artist and textile designer feting the publication of her first monograph, aptly titled “Lulu,” but de Kwiatkowski also was receiving congratulations from friends such as Jamee Gregory, Anh Duong, Celerie Kemble and Jennifer Creel on the news that she’s expecting twin boys with her husband, Alfredo Gilardini.

“I am really excited,” said the expectant mama, who is five months along. Her book tour, which began with a party at the Oscar de la Renta boutique in Bal Harbour, Fla., is turning into a sort of last hurrah before she and her husband relocate to Los Angeles. In fact, the jet-setting new author is looking at motherhood of two as just one more trip: “It’s like, for a four-hour plane ride, you might get antsy and want to get off. But if you know it’s a 14-hour plane ride, you are ready for it. That’s how I’m thinking of it, anyway,” she said.

This story first appeared in the May 5, 2008 issue of WWD. Subscribe Today.

Meanwhile, Gilardini is having a little fun with his wife. “He calls me ‘Porky,'” said de Kwiatkowski — who is anything but.

On Wednesday, fashion folks embarked on something of a Meatpacking District party crawl when two events vied head-to-head for their attention. First stop was the Carlos Miele store, where the designer and Vogue hosted cocktails to celebrate a collection of custom T-shirts whose sale benefits the Rainforest Foundation-U.S. As the band Groupo Saveieo (who flew in from Brazil for the occasion) set the ambience, Carlos Miele explained his commitment to the chosen charity. “Sting was a visionary when he went to Brazil 20 years ago and drew attention to this cause,” he said. Miele enlisted the likes of Scarlett Johansson, Caroline Trentini, Camilla Belle, Alice Braga and Diana Picasso to design T-shirts. Picasso drew on broken trees for her illustration, while Braga was inspired by “pictures of Brazilian Indians and the wood in their noses and lips — I wanted to make it abstract.”

Guests such as Victoria and Vanessa Traina and Kim Raver paid their respects, then some hightailed it over to Phillips de Pury & Co. where Seven For All Mankind and Vanity Fair were hosting the annual Free Arts NYC Art Auction Benefit. Guys in suits practically outnumbered girls in frocks as the likes of Michelle Monaghan, Peter Som, Erin Fetherston, Thom Browne and chairs Amy Sacco and Mary Alice Stephenson perused the silent auction multimedia portraits.

“Some people buy shoes. I have a thing for photography,” said Raver.

Further downtown, Christie’s was celebrating the upcoming sale of Andy Warhol’s “Double Marlon” painting at the Soho Grand. In homage, waiters dressed in Marlon Brando-esque leather caps and black shirts were traipsing around.

So was designer Jeremy Scott, wearing a leather jacket, biker boots and his own leather cap.

“When I got here, I was like, ‘Duh! I totally dressed for this like it was a costume party,'” said the designer, who had not meant to be so on-theme.