Editors, designers and other fashion folk took in an advance screening of the documentary Monday night.

By Zeke Turner and Matthew Lynch on February 1, 2011
View Slideshow 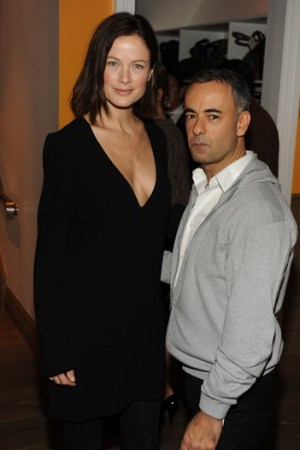 “Is Bill here?” asked a guest after checking her coat downstairs at the Crosby hotel on Monday night. “Is Bill coming?” asked another five minutes later. But Bill Cunningham, the 82-year-old New York Times Styles photo-columnist, was nowhere to be found at the screening of the new documentary “Bill Cunningham New York,” hosted by Calvin Klein Collection and the CFDA’s Steven Kolb.

“He’s never seen the movie,” admitted Richard Press, the film’s director, standing next to Philip Gefter, his husband and the film’s producer.

“Not only has he not seen the movie, although he’s given us his blessing, but you know his On the Street online column every week in The Times? He’s never listened to it,” added Gefter.

The pair met Cunningham while working at The Times, where Gefter was a page-one picture editor and arts writer for 15 years. Press worked at the paper intermittently as a freelance art director. Sometimes he worked on Cunningham’s pages, On The Street and Evening Hours. It took the two men eight years to convince Cunningham to allow them to make the documentary.

“We wore him down,” explained Gefter, “and he trusts us.” Press tore a tea bag open with his teeth and plunked it into a cup of hot water. He was losing his voice. “He knows that we understand who he is,” Press said, “and so I think he trusts his image in our hands.”

The film opens with Cunningham wheeling his Schwinn bicycle — his 29th, he says, after the first 28 were stolen — out of a storage closet next to his apartment in Carnegie Hall. (He has since been forced out of the building.) The next minute he’s darting through traffic and crouching to photograph a dress swishing across the street. “Let’s get to steppin’ and crackin’!” he beams. “Oh, isn’t this fun?”

The movie chronicles the most mundane details of Cunningham’s life, quite the accomplishment with a press-shy subject. Even his meals are interesting. He eats Chinese takeout for dinner in The Times building on Eighth Avenue, picking out the pieces of green bell pepper. At breakfast, he gleefully shows the inside of his sausage-and-egg sandwich to the camera — “the cheaper, the better!” In Paris during fashion week, he swallows “heart pills” out of a New York Times envelope with coffee and removes the dough from the bread of his ham-and-cheese sandwich at lunch.

Near the end of the film, Times publisher Arthur Sulzberger Jr. leads Cunningham into a surprise birthday party for cake. “We are so delighted to have you as part of our family and to be part of yours,” Sulzberger says.

“Family! I’ve fought with every one of these kids,” replies Cunningham, grinning at a roomful of Times staff dressed as Cunningham in plain blue smocks.

“I think everyone has such profound respect for his astonishing integrity,” said Hamish Bowles before the screening. He first met Cunningham while “crashing” fashion shows in Paris as a student at London’s Central Saint Martins in the early Eighties. “I’m so in awe of the filmmakers,” he continued. “I cannot imagine how long it took them to persuade him to let them in.”

Grace Coddington said Cunningham asked her for advice about surviving the documentary process. “He said, ‘Grace, I don’t know how you deal with it. They follow me around everywhere. They’re following me! How do you deal with it?’ ” she said. “I think I just threw up my hands in horror and said, ‘I don’t know. That’s the way it is today.’ ”

“You have to just lie back and enjoy it,” Coddington continued. “Otherwise you’re going to have a miserable time.”

Press and Gefter have succeeded where many have failed. In 1996, Guy Trebay profiled Cunningham for Art Forum. Trebay approached the photographer on the street to tell him about the story and request an interview. “Oh, no! No. No. No!” Cunningham said. “I’m totally against publicity.” Trebay called this Cunningham’s “ostentatious humility.”

When Cunningham himself wrote an essay for The Times about his work in the fall of 2002, he started by explaining why he’s a bad photographer. “To be perfectly honest,” he wrote, “I’m too shy. Not aggressive enough. Well, I’m not aggressive at all. I just loved to see wonderfully dressed women, and I still do. That’s all there is to it.”