The Final Night at The Four Seasons Restaurant

New York bid farewell to the beloved Four Seasons restaurant on Saturday evening, as the institution packs up and prepares to vacate the famed Seagram building. 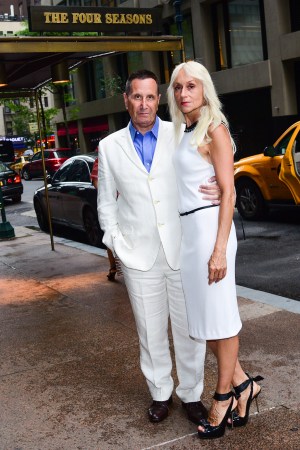 “Tonight is the last night?!”

An indicator that you might be a loyalist or a regular at the famed Four Seasons Restaurant would be that your presence at the Manhattan institution on Saturday night had nothing to do with the fact that the place was serving its final dinner. After standing in Midtown since 1959, the restaurant will vacate the Seagram building and reopen a few blocks away in late 2017, the result of a lease discrepancy between owners Julian Niccolini and Alex von Bidder and the Seagram building’s owner, Aby Rosen.

Those blissfully unaware of the imminent closure were in the minority Saturday evening; reservations for the last night opened two months prior, and interest for the final night was especially high, according to the restaurant. As early as 4:30 p.m., black cars began pooling up on 52nd and Park, dropping off longtime fans of the restaurant, famous for its power lunch crowd and equally glamorous set of evening diners. By 5:15 p.m., the line inside to check in for reservations piled up past the bar, patrons eager to make sure their reservation was upheld.

It might have been any other night at the famed New York restaurant, but the details told otherwise — photogs discreetly dotted the room, hair and makeup looked especially well-executed, and nearly every guest came ready to photodocument the evening. The audience had a mix of those who appeared to have skipped Nantucket for the occasion -— red chinos, worn loafers, and an LL Bean tote to match (monogrammed, naturally) — as well as those who broke out a tux in honor of the final supper, and some who came simply for a glimpse of the institution on their way home from a day at the museums, sneaker-clad and eager to snap the pool room.

The Four Seasons has not only been a staple for many in New York, but a destination for the jet-set as well. “We live between Miami, Chicago and Paris, but we’ve always come here for years,” one couple said from the bar. “We’re only stopping by for drink — a quick Chardonnay before we head out.”

Even with connections, reservations were hard to come by. “Oh, just here for a drink,” a gentleman admitted bashfully, tugging on his blazer. Requests for rosé were frowned upon (although politely), while martinis and Manhattans reigned amongst the crowd.

The staff made their rounds greeting regulars, a group of whom came with a 10-month-old baby in tow, “for her first martini!”

“Actually I was here last night,” an apparent superfan admitted to another guest, as they bonded over stories of nights spent in the pool room. “I’ve always imagined coming to this place,” said another guest, lingering by the bar in semi-wonder. Others found themselves drinking a mint julep at the bar by happy accident. “I was at the MoMA earlier and I just randomly came here,” a woman gushed, tickled with her miraculous sense of timing. A pair of individuals perched at the corner of the bar struck up a conversation which slowly melted into flirtation — surely a story to tell the grandchildren.

On July 26, diehards will have a chance to take home vestiges of the restaurant, when furniture and the like are auctioned off. “I might bid on this bar stool,” one guest said. And though many find comfort in the fact that the restaurant will reemerge next year, it was still a sentimental night for those who associate the Four Seasons with the city it lives in. On her way down the stairs, one older woman took a final look at the crowded scene milling about the bar. “This place,” she said, “this is what I love about New York.”