Carmelo Anthony was a very popular man at the charity’s dinner on Thursday night. 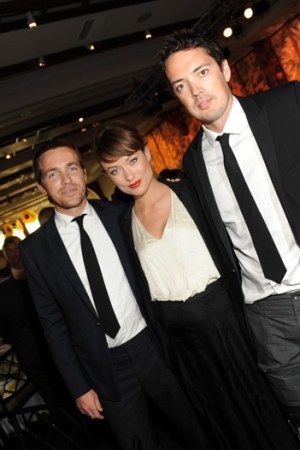 The New York Knicks’ season may have ended with a first-round playoff sweep a month ago, but the franchise’s newest star was still in high demand on Thursday night at the Fresh Air Fund’s Salute to American Heroes at Chelsea Piers. Carmelo Anthony — who was being honored along with Tommy Hilfiger and Olvia Wilde — earned the most raucous applause of the evening, got the biggest rise out of emcee Ann Curry (who seemed genuinely shocked when she mimed their height differential) and was easily the dinner guest most consistently bugged for photo ops.

“We’re just relaxing right now, trying to get used to the New York City life,” Anthony said when asked about his summer vacation during cocktail hour, where he and wife Lala Vasquez greeted well wishers. And what had the biggest adjustment for the pair been?

“Moving,” he said. “Trying to find a place. Going from Denver to here, living in an apartment.” So the real estate situation was a little different from Colorado? “Tough,” he laughed.

As cocktails ended guests, who included Leigh Lezark, Tiki Barber and William Lauder, made their way to tables decorated with Styrofoam straw boaters, hand balls and other summer signifiers. Given the general aim of the Fresh Air Fund, to introduce city kids to greener climes in the warmer weather, it seemed appropriate to ask the night’s honorees what their childhood summers were like.

“I was a newspaper boy; I played baseball,” said Hilfiger. “I mowed lawns. I worked as much as I could…It was a necessity in my family. I worked from when I was like 9 years old.” “Still working,” he said with a laugh.

Wilde was presented her honor by David Neville and Marcus Wainwright of Rag & Bone, despite the fact that Wainwright was on crutches due to a knee injury. (“We actually had an argument earlier on,” Neville joked, “and I won.”) The actress said she felt personally connected to the charity’s mission.

“I was a city kid,” she explained. “For me going and spending time in the woods and camping and learning about stars and learning how to survive in the wilderness — just appreciating nature — has a huge amount to do with my perspective on the world and my relationship to nature and all living things.”