The Frick Throws ‘Into the Garden’ 2016 Spring Garden Party

The Frick hosts their 2016 spring garden party, this year themed "Into the Garden." 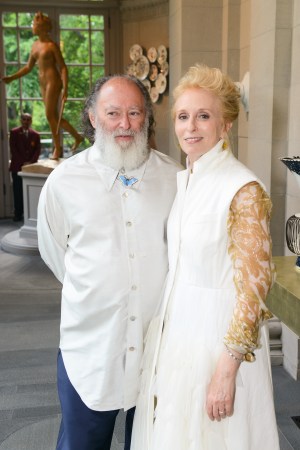 Both the Young Fellows and the Fellows of the Frick Collection returned to the Fifth Avenue museum on Monday evening for the annual spring garden party, this year in celebration of “Porcelain, No Simple Matter: Arlene Shechet and the Arnhold Collection,” the museum’s current special exhibition. The display features more than 100 works of 18th-century porcelain pieces manufactured by the German company Royal Meissen, selected for the exhibit by New York sculptor Shechet.

Though the skies looked as if they were threatening to break into rain, the good weather held throughout the evening, save for the occasional breeze. “I’d kill for my pashmina right now,” a guest remarked to her cohort, as they turned to head in for the galleries, which stayed open through the evening. Inside the museum it was another stressful night for the Frick security, who had to continuously remind guests to maintain their distance with the art — even at the cost of a slightly less dramatic selfie.

Back in the garden, the younger ladies in attendance lined up for “fashion sketches,” offered through Saks Fifth Avenue, while over by the bar, an older gentleman used a pocket-sized digital camera to take a selfie — a true marrying of old and new.

As ever, a good garden party is the prime occasion to get use out of any show-stopping hat that might exist in one’s closet, and Monday’s crowd did not disappoint.

“We love these kinds of things,” said one woman, pointing to her electric pink fascinator. “It’s just hard to find a place to wear them. I saw pictures from last year and I saw some pretty big, fabulous ones. We’ve been collecting some.”

Others took hat inspiration from the venue’s assumed clientele. “It’s mine, I made it,” Rosemary Ponzo said of her hat, which featured an exaggerated caviar container. “It’s two hats in one! And it’s staying put, because I know how to use tape.” And what made the Frick the perfect place for such a look? “Because you need to be a billionaire to own this house,” she said, “and they would probably just have caviar everywhere.”