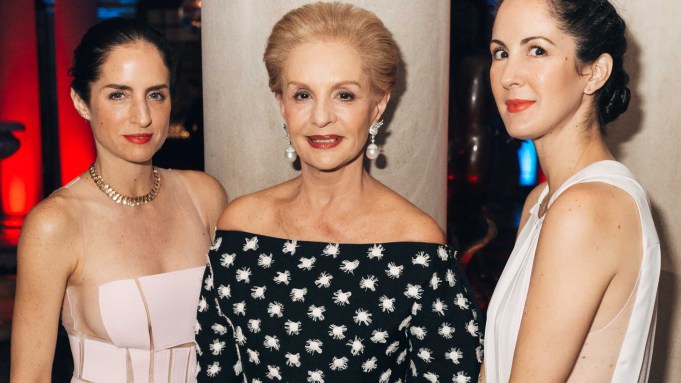 One could barely navigate the gallery rooms at the Frick museum Thursday night without being asked to snap an iPhone photo of a dapper couple, posing their hearts out with the Frick’s finest as a backdrop. The museum was lit up for Palladium Nights, the disco-themed bash for the 17th annual Young Fellows Ball. Guests including Emmy Rossum, Alexandra Richards, Nicky Hilton, Kick Kennedy, Mia Moretti and Chelsea Leyland attended, many dressed in gowns designed by the evening’s sponsor, Carolina Herrera.

While last year’s event featured Instagrammable printed fans, times have changed and Instagram geo-tags simply aren’t enough to start a trend. The social ante was upped with a customized Snapchat filter, which found plenty of use throughout the night.

Herrera’s daughters Carolina and Patricia Lansing swept through the galleries looking at the paintings, perhaps the only people not taking selfies with the art — a dying breed.

Rossum, dressed in the finale look from Herrera’s pre-fall collection, is bringing Carolina Herrera into her home decor. “I’m doing an apartment here in New York; my fiancé and I moved back,” she said of her new home with Sam Esmail, showrunner of the breakout hit “Mr. Robot.” “And I was just talking about pillow fabric today and I was going through some old boxes of stuff, and I found quite a large piece of discarded fabric from the Met ball dress that Mrs. Herrera gave me that’s a big, bright yellow neon print. And I’m turning it into pillows for my apartment. So she’s everywhere in my life.”

The actress, currently on a break from filming “Shameless,” was also feeling at home at the Frick. “I grew up just a few blocks away from here — a little bit not as fancy, more towards the East River,” she said. “My mom would bring me here when I was quite young, in the afternoons, for the classical concerts in the drawing room. It was around the same time that I was getting into singing in the choir and the opera.”

“I wanted to revive something that doesn’t exist anymore,” said the designer herself. “I think disco fashion was fabulous. We don’t have anything like disco anymore. It’s coming back. Everything comes back.”

Herrera hadn’t been back to the museum since her show during New York Fashion Week, which is the second time she’s shown there. “It was a great honor for me that they allowed me to have it here,” she said.

“This is definitely our young event – there is an option to buy an older ticket but most people are under 39,” explained Amory McAndrews, who is serving in her first year as chair of the steering committee. Indeed, the crowd was just that — one of the few times “young” actually sort of means that.

“Carolina debuted her first line in New York in the early Eighties, so it’s a throwback to that time, to that glamour,” McAndrews added. Disco as the theme may have been, oddly enough it was a synth-heavy remix of The Black Eyed Peas “My Humps” that drew people to the dance floor. Herrera herself had safely departed by this time.

By the end of the night, as the drinks had settled in and more made their way to the dance floor, most of the selfies had been snapped — but there were some who weren’t quite finished yet.

“Bill, can we get a picture with you?” a fanboy asked Bill Cunningham, who was midsnap. “Just a minute, I’m trying to work!” the famed photog responded.