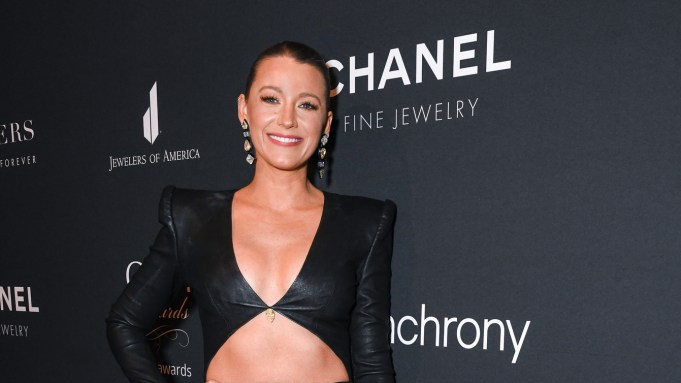 NEW YORK — The Jewelers of America last week marked the annual Gem Awards event, back in person after being held digitally in 2021 due to the global pandemic.

The evening honored designers, retailers, editors and executives for their contributions to the jewelry industry over the last year. Winners included Lorraine Schwartz for Jewelry Style and Stephen Lussier, DeBeers Group’s executive vice president for brands and consumer markets, for Lifetime Achievement as well as awards for jewelry design, media excellence and retail excellence.

“Being with her is like coming home,” explained Blake Lively, who kicked off the night in a Sergio Hudson look to giving a heartfelt speech about working with Lorraine Schwartz. Along with Lively there were videos from Tina Knowles, Pharrell Williams, Heidi Klum and Kim Kardashian, each praising the designer’s work.

“Yes, she cares about the jewels, but what she cares about more are the people, the humanity, the connectivity,” Lively continued, recalling her initial meeting with Schwartz for Lively’s first Met Ball.

Her speech underscored a theme of the night: the deep sense of community within the tight-knit jewelry community. The excitement in the room was palpable, with guests marking the 20th anniversary of the event by expressing gratitude about being able to gather in person.

“This is an amazing industry and we can do much together,” Schwartz, a third-generation diamond dealer, said while giving thanks to her family and team. She also spoke to the Black, Indigenous and people of color designers who are part of the program she spearheads with the Natural Diamond Council, remarking, “I’m so proud of you and I’ve got your back. One day I hope you too will be up here.”

Next up was the award for media excellence, given to Melanie Grant. The journalist pointed out that she grew up in a council estate in the U.K. and never thought the luxury world was open to her, but she explained that she has been welcomed in. “I’m very privileged to be able bring people like me along for the ride,” she said.

Marissa Collections took home the win for retail excellence, beating Muse and Saks Fifth Avenue. Jewelry Design was awarded to Lauren Harwell Godfrey, who was brought to tears by her win. “It’s been such an honor to be a part of this category,” she remarked, highlighting her team and all those along the way who have helped her.

“While this is an award about the past year, to me it’s about the future. I want make you proud,” she said, explaining a big part of her work is also being able to give back to causes she cares about. “By shining a light on these causes, the support, it’s only going to  grow,” she said, closing by asking for a bottle of tequila to be brought to her table to celebrate.

A Virtual Gem Awards Toasts to a Resilient Year for the Fine Jewelry&nbsp;Industry