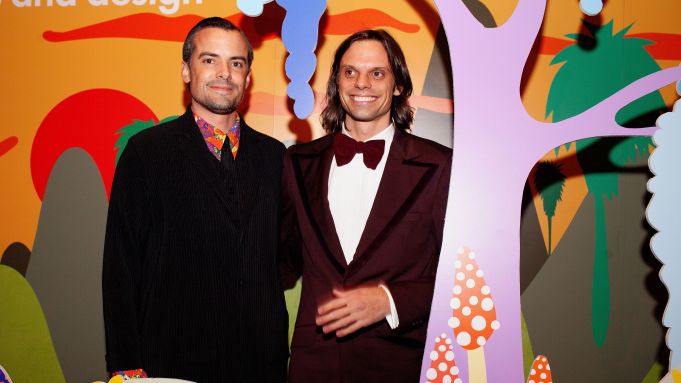 The MAD Ball brought a little more whimsy than usual to Cipriani 42 courtesy of the Haas brothers’ own creations.

Twins Nikolai and Simon Haas were the honorees at this year’s event, and during cocktail hour they were having a magical moment.

“Can I show you a big trick that’s a little fancy? Really quick,” said a man approaching the brothers with a deck of cards in hand. He instructed them to both choose a card and then say the magic words: “Look alike.”

Turning them over, they found a sticker of their own faces atop that of the kings they had chosen.

“You make every day happy,” added the magician, walking away and leaving the two men in wonder.

“I love this museum,” said Simon Haas. “Craft is very dear to my heart so it’s exactly the right type of place that we want to be associated with, and we’ve been coming here for years. A lot of friends and people who have helped us out are involved in this museum and are going to be here tonight.”

The brothers, who use various materials — including beads and fur — to create colorful and fantastical creatures and worlds, have had a momentous year. And not least because of their recent collaboration with Rihanna and Phaidon, for which they designed various stands (at various price points) for her newly released book. They had illustrated two custom backdrops for the evening, and pieces from their tableware collections served as centerpieces around the room.

“For sure, a lot of people that didn’t know about us now do because of Rihanna — that was such a cool project and I’m obsessed with her, so it was a dream come true,” added Simon Haas. “I think the biggest was [gallerist] Marianne Boesky had us at the Frieze fair in London, and that was a new market for us. I don’t think people knew us and they responded so well to the work, so it gave me a renewed excitement,” he added. “It shows me that I haven’t —” (he paused, thinking of the right sentiment). “That I’m not just buying into my own crap.”

The museum is also making a push to engage with a younger crowd, and Alexander Hankin is heading up the effort as cofounder of the young patrons program.

“I think so much of my generation is going to experience art through our phones, but what’s unique about MAD is, really, it’s a great place for people to go and experience art in process and in real life. And I think nothing compares to seeing it in person,” he said. “My hope with this new group is to really get people out to experience art, interact with artists. We have the Haas brothers tonight, and who’s more fun and interactive?”

“They’re really out of this world with some of their pieces,” said fashion lawyer Elizabeth Kurpis. “They make a room which is more traditional — which is my style — a little more fun but adding in something that’s more contemporary and cheeky.”

(And that was certainly the case for the former bank environment that is Cipriani.)

Design blogger Athena Calderone’s yellow Fendi gown was a natural fit for the illustrated backdrop. “It’s almost outside my comfort zone, but perfectly outside my comfort zone,” she said of her dress; the fashion house had sponsored the event. At another event last week, she met someone special who proved hard to leave behind for the Monday evening event.

“I adopted a puppy yesterday, and it was so challenging to leave him today. I was actually out on my terrace just before I came here in this gorgeous Fendi dress potty training him and teaching him how to sit. It was really sweet,” she said; the call of MAD prevailed.