‘The Infiltrator’ Premieres in New York

Bryan Cranston and Diane Kruger were joined by James Franco and Mickey Rourke for the screening on Monday night. 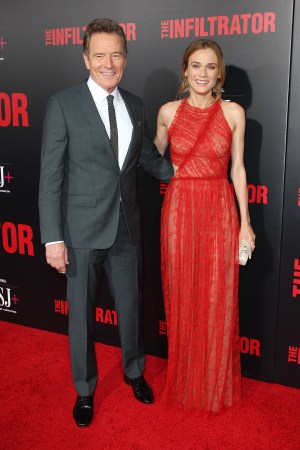 “He’s here tonight, hidden in plain sight,” Bryan Cranston disclosed on Monday night. “I can’t point him out to you or anyone else because he put a lot of people in prison and they would like nothing more than to get back at him.”

Espionage, drug rings and even members of the Witness Protection Program were the talk at the New York premiere of “The Infiltrator,” the true story of federal agent Bob Mazur who goes undercover to infiltrate Pablo Escobar’s drug trafficking operation. Mazur himself was apparently on site, an apparitional presence to reporters and moviegoers  — James Franco, Mickey Rourke and, curiously, Pauly Shore among them.

“He’s pretending to be a bad guy during the day and, what got me, is he has to leave that behind everyday when he comes home and becomes Bob Mazur the dad, the husband,” Cranston, who spent ample time with Mazur to research the role, continued. “I was curious about a man who likes that duality and how he makes it all real and authentic.”

Cranston credited the script with encapsulating Mazur’s moral complexity. “[The scenes] are like a soufflé,” Cranston explained with a smile. “And you make the soufflé and do what’s written. And then you bake it for the right amount, you rehearse the scene, you get it right, and it rises to a certain point. And sometimes it really rises. Those come as surprises.”

Cranston’s costar Diane Kruger, beaming in a crimson Jason Wu gown, has an equally meaty role. “She was a total trailblazer,” Kruger told WWD. Kruger plays Kathy Ertz in the film, Mazur’s fiancée and rookie agent also undercover. “Women those days never went undercover so she had to fight to be taken seriously.”

After viewing the film, in theaters Wednesday, the cast cabbed it downtown (apparently Kruger changed in the car, as she arrived to the club in a black sheer number) to Lavo to dance in a corner booth.