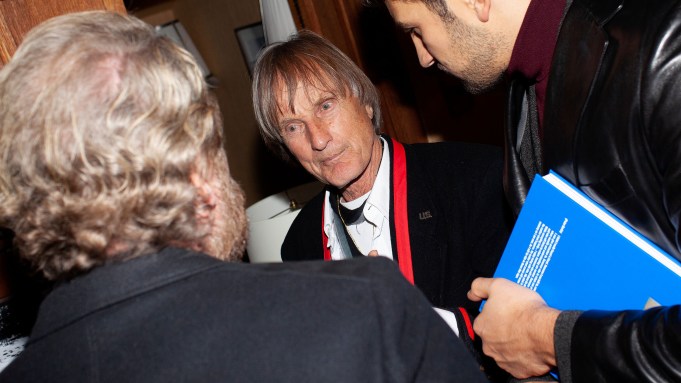 “I always say ‘Who in the hell knows Peter Berlin?’”

The man himself was tucked in the back of L’Chalet, the lower level club space at L’Avenue at Saks Fifth Avenue, where, nearing 10 p.m. on Thursday night, he was the man of honor at his second event of the night. As it would turn out, many people not only know who the hell Mr. Berlin is, but care quite deeply — as sensed by Damiani, which has published a new book of Berlin’s photographs, “Peter Berlin: Icon, Artist, Photosexual.”

After a book signing at Bookmarc, Berlin was celebrated with an after party, in partnership with Silvia Prada and Michael Bullock, at L’Chalet, where he discussed his life’s work with passing admirers, many of them younger New Yorkers. (“I jumped generations without doing anything,” Berlin said of his shock that young people care about him.)

“It’s a real celebration of queer sexuality,” said Thomas Cawson, creative director of Helmut Lang, of Berlin’s influence. “Celebrating a totally queer language of what streetwear looks like. Everything we do at Helmut, there’s always that undercurrent of referencing those iconic, underground moments. Especially when there is that beautiful queer twist to it.”

Berlin, who turns 77 next month, has always lived somewhat off the grid, apart from the leather community or the gay community, according to his manager. Based in San Francisco, it was his first time back in New York since 1990.

“I stopped traveling completely,” he said, adding that he “dreaded” the trip prior to arrival. “I don’t have friends [here] anymore who are alive.”

Berlin said he considers himself “too old” for such a trip like the New York one, but nonetheless was in high spirits, joking about the deafening volume of the music. (“Can you tell them to make the music a little bit louder?”) and explaining his outfit, which he made entirely himself (the blazer jacket only the day before.)

“This whole thing amazes me,” he said. “I stopped living, basically — I don’t do anything anymore. I only use my time to think. I love thinking, and trying to figure out stuff. I try to think ‘why did I do why I did?’ My mind is very entertained. Usually people either bore me, or annoy me, so I’m by myself, right? And it’s sort of a luxury.”

He spoke about being an icon to so many in the gay community, saying it surprised him to hear how much of an influence he’s had on men’s lives.

“I met guys who say ‘oh I saw your picture when I was 12,’ and they thank me. They come to me and they say you gave me strength. I never had that experience of ‘oh me, the poor gay guy.’ We had a blast. I mean, I had to run away from the police in Berlin…” Berlin said. “Some guys I’ve met here, who had this traumatic thing with being gay. [Not me] — no no. We had a blast. The people who saw my picture, what is the different thing when you see a drawing of Tom of Finland? It’s a fantasy. But there it was real [with my pictures[. And that’s why I’m still here.”