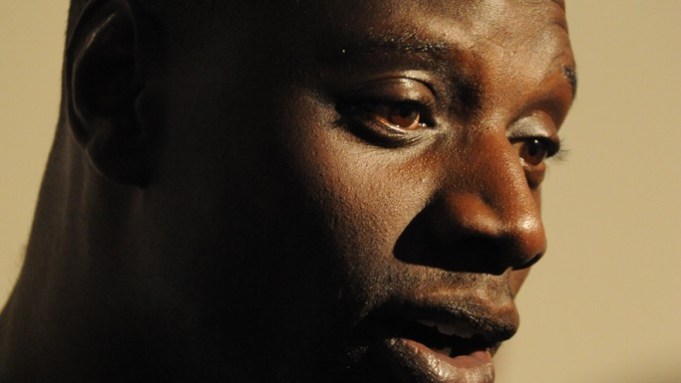 On Wednesday night at La Petite Maison, Omar Sy’s English translator was getting a workout. The Weinstein Co. and Chopard had just screened the French actor’s breakout film, “The Intouchables,” across the street at the Museum of Modern Art and Sy had a number of enthusiastic cinemagoers to receive.

“We were all crying and laughing, and I wish they made more films like that because it had so much beauty,” a visibly excited Lucy Sykes gushed to the actor. “And I’m in love with you! I’m married. But I am in love with you.”

Sy didn’t need to wait for his interpreter to translate Sykes’ general sentiment to offer up a polite “thank you, thank you” in return. A few minutes later, Harvey Weinstein made his way up with Stanley Crouch, who wanted to know if Sy read English. There was maybe a project they could work on.

In short, “The Intouchables,” which has been a sensation at the French box office since its November release, was a hit with the New York crowd, which also included Valentino, Alexa Chung, Olivier Theyskens, Tamara Mellon and Eddie Borgo. In the feel-good, odd-couple story, Sy deploys his comedic chops as the irrepressible caretaker of a wheelchair-bound aristocrat. Though the film is in French, Sy’s humor transcends subtitles. Weinstein was likely banking on that charisma when he backed the film’s U.S. release, a move that furthered his recent trend of scooping up French productions such as “Sarah’s Key” and “The Artist.” (Sy, it’s worth noting, beat out Jean Dujardin for this year’s best actor Cesar two days before the Oscars.)

“I think they’re making movies now because they’ve settled the Internet,” Weinstein said when asked of his Gallic tendencies. “There’s no piracy in France. If you pirate something, they will cut your Internet service off. Seriously. They made tough laws. They’re protecting the industry. The artists, actors, and musicians are all getting their share of royalties and business is booming over there, so they have the economics to make great movies.”

Inevitably, there has been talk of an American remake of “The Intouchables.” Sy demurred when given the chance to pick his English-speaking successor.

“You know, I’ve been asked this question multiple times today,” Sy said through his translator as he nudged his chin at Weinstein. “I really have no idea. You shouldn’t ask me. You should ask the person behind you.”