The Meryl Streep-starring Margaret Thatcher biopic showed at The Ziegfeld Theater on Tuesday.

By Matthew Lynch and Alessandra Codinha on December 14, 2011
View Slideshow 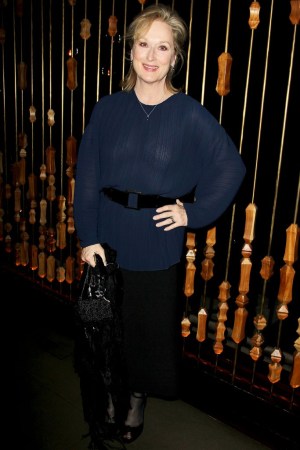 The Weinstein Co. premiered its latest bit of awards season bait built around the real-life tales of the British ruling class on Tuesday night at the Ziegfeld Theatre in New York. This year’s edition is “The Iron Lady,” a Margaret Thatcher biopic that presents the former British prime minister’s life in a series of episodic flashbacks. Meryl Streep’s turn as Thatcher has, of course, earned the actress some early Oscar buzz. A number of notable filmgoers, such as Anne Hathaway, Ellen Barkin, Gloria Steinem and Parker Posey, turned out to get a glimpse of the performance, which lends quite a bit of humanity to the sometimes strident leader.

As she briefly tread the red carpet at the Salvatore Ferragamo-sponsored premiere (nodding to Thatcher’s style in an Asprey of London pendant and earrings), Streep fielded a question about how the former prime minister might handle England’s rather isolationist positioning amid the ongoing euro zone crisis.

This story first appeared in the December 16, 2011 issue of WWD. Subscribe Today.

“That’s waaaay above my pay grade, babe,” Streep laughed before riffing on Thatcher’s confidence of conviction. “I don’t know. But there was a period in the world before extensive polling sort of drove the political conversation [when] there was a little bit of clarity. You knew who you were dealing with when you dealt with her, whether you liked it or not.”

After the movie, the crowd navigated the 10-block journey to Forty Four, the bar and restaurant at the Royalton Hotel in Midtown.

A little before midnight, Hathaway was on her way out the door on the arm of new fiancé Adam Shulman.

“Witnessing it was a gift,” the actress said of Streep’s performance. “She left me speechless and I think the Oscar race is done.”

Well, maybe not quite yet.

A few addresses east of the Ziegfeld, the Museum of Modern Art on Tuesday played host to a Cinema Society screening of another awards season contender, the Glenn Close gender-bender, “Albert Nobbs.”

The actress originally starred in a stage production of “The Singular Life of Albert Nobbs” in 1982, and has spent parts of the last 15 years trying to have the work adapted to the screen. So it made sense that she sounded a little satisfied.

“I believe in this story,” Close, who also co-wrote the screenplay said. “It’s funny, it’s heartbreaking.…It’s unexpected. Wildly unexpected. The talent that we had involved.…I’m very happy with it.”

The film takes place in 19th-century Ireland. Close plays a woman living in disguise as a man largely for economic reasons, but feeling all the expected emotional repercussions. The crowd at the showing and subsequent party at the Armani Ristorante included Close’s daughter, Annie Starke, Lauren Bacall, Lou Reed, Patti Smith, Francesco Clemente and Debbie Harry.

Rose Byrne and Mia Wasikowska, who co-stars with Close, laid on a pair of black-velvet-covered chaises in the middle of the crowded restaurant. Tony Danza held court at the bar and tussled affectionately with Paul Haggis.

“It was a very beautiful world [the world of the film], and Glenn was amazing in it,” Danza mused of the film. “Totally transformed. But I’m not sure, actually, that I bought her as a man…maybe she should have had a beard?”

Toward the end of the evening, Sinéad O’Connor took to the microphone for a surprise musical performance. Courtney Love headed for the exit, friend in tow.

“Where is the Monkey Bar in relation to here?” Love asked. “Let’s go.” One partygoer watched her exit and sighed, “Well, it’s over when the bald lady sings?”